Whilst website QA testing has transformed significantly in recent years, a new mindset is required for it to transform completely.

In a business environment where agile methodologies are increasingly being adopted, the software is updated and released faster and faster. This is no different with QA for website testing.

In software testing, agile methodology involves the continuous iteration of development and testing throughout the software development lifecycle.

In general, websites have become far more complex, and that has had repercussions for those who have to test them. Updates to web and mobile apps are updated weekly and monthly, and when it comes to bigger companies, it can be daily. 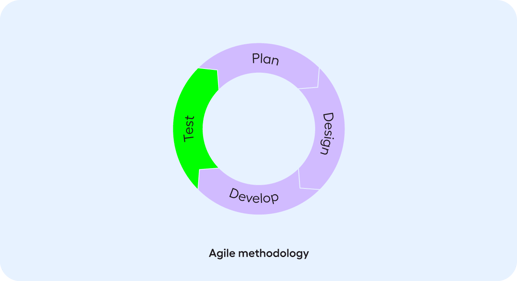 The nightmare caused by constant browser updates, and the subsequent need to update testing processes built around those browsers makes testing websites a massive challenge. The need to test across different browser permutations and mobiles only adds to this. Overall, the QA testing of websites has become more critical.

Take Selenium WebDriver—the most popular way of automating website testing—as an example: when browsers are regularly updated, web browsers and WebDriver become out of sync, and WebDriver starts failing.

So, the difficulting of website QA testing across browsers, browser versions, and updates has increased in a more and more agile environment. But how are QA teams adapting to this trend through automation and new approaches?

The development of QA teams says a lot about how website testing has transformed and continues to transform. In the past, software testing environments were characterized by a strong separation between developers and testers. Once code was developed, it would then be sent over to be tested.

In their 2021-22 world quality report, Capgemini asserted that there is a ‘growing culture of responsibility across all teams’ in companies (rather than just among developers and testers).

It is a lot to ask for an automation engineer to have both a developer and tester mindset, and instead it makes sense to play to the strengths they already have. By giving them the right toolset, developers can be empowered to improve their efficiency, rather than spending all their time building and maintaining automated tests.

Although manual testing used to dominate, testing is increasingly automated. Before this was the case, even large teams of QA testers would struggle to test all the elements of websites.

With automated testing, thousands of virtual users can be simulated and web elements can be tested.

Despite these developments, when it comes to website testing, QA teams and developers still remain relatively separate. A lot of that is because website testing often involves coded automation.

One negative result of this is that those who are more knowledgeable about the function of a website in relation to their business are removed from the actual test cases; they don’t necessarily know how to maintain and build test cases.

So how can testers with knowledge of their website be brought further into the testing process?

With a codeless approach to automating website QA testing, the gap between developers and testers can be decreased. QA teams can make full use of the benefits of automation and focus on innovation, without relying on developers.

Leapwork’s entirely unique visual approach to test automaton gives you all the power of automation with none of the development bottlenecks like high maintenance and long onboarding and build times.

Website QA testing has undoubtedly transformed for the better. However, achieving what Capgemini refer to as a ‘quality mindset’ in QA requires a whole new approach to test automation.

If you want to know more about web automation, download our guide to Web Automation.

How to Execute an Agile Testing Pyramid With Automation

Test automation has become a key enabler of agile development, so it is no surprise that an Agile Testing Pyramid requir...

What Is A Test Automation Pyramid?

A Test Automation Pyramid, or Agile Testing Pyramid, allows us to find the desired balance in testing through a represen...