Work Better Together with Leapwork Release 2018.2

Leapwork version 2018.2 includes a host of new productivity features, significant upgrades across the board and more than 250 bug fixes.

Focus on Productivity, Platforms, and DevOps

With the 2018.2 release, we deliver full support for enterprise Java desktop applications such as Oracle Forms, significant productivity improvements such as sub-flow parameterization with drag-and-drop and a new neural-network based OCR engine. And we have added new REST API endpoints for even tighter DevOps integrations.

We highly encourage you read through this list of new features and then reach out and speak with one of our product specialists today if you haven’t already heard from them.

Automating enterprise Java desktop applications such Oracle Forms has so-far been almost impossible using other tools. With version 2018.2, the desktop building blocks in LEAPWORK now support hassle-free automation of desktop applications built with all Java platforms, including those from IBM and Oracle for x86 and x64 versions of Windows. 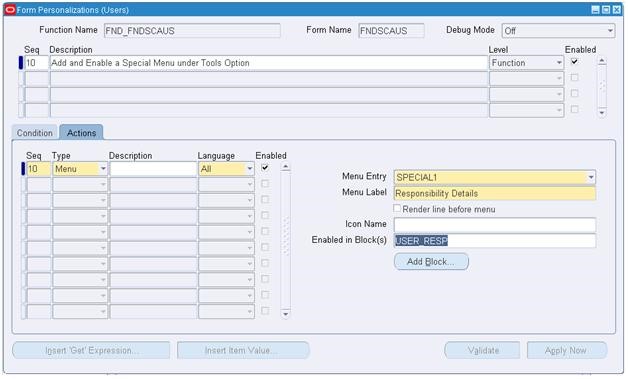 Note that only Java version 1.7 and later is supported by the desktop building blocks. For earlier versions of Java, we recommend using the image and text-recognition building blocks.

The LEAPWORK Automation Platform is all about taking ownership of automation without needing to have deep technical skills, and high-productivity features play an important part in making that happen. In the 2018.2 release, we have added a number of much-requested improvements in this area.

First of all, when working with sub-flows, it’s now very easy to add parameters; simply drag and drop a blue or green wire to the left side of the sub-flow. You will be prompted to enter a name for the parameter, and then it automatically gets wired up to a blue or green input block inside the sub-flow.

It also works “in reverse”; you can drag and drop a blue or green wire to the right side of the sub-flow, which will create output blocks inside the sub-flow.

To help navigating large suites of flows and sub-flows, you can now right-click any sub-flow and select “Show in Tree”, which will make the tree-view on the left side of the screen automatically show the position of the selected sub-flow. 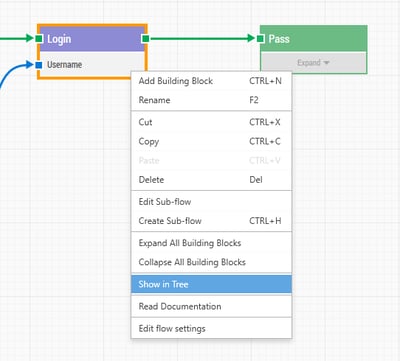 When adding a sub-flow to the canvas, the “Add Building Block” popup now shows the tree structure of the sub-flows, which makes it much easier to navigate to the right sub-flow. Additionally, the type-ahead filtering in the list of building blocks has been made case-insensitive, which also helps navigating to the right blocks: 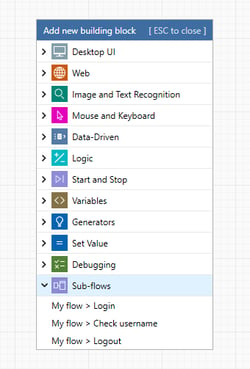 We have added the following highly-requested keyboard shortcuts:

And last but not least, schedules can now be copied and pasted, just like other assets: 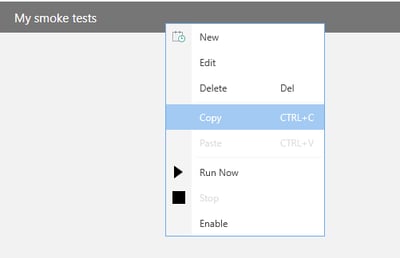 The 2018.2 release comes with a large number of significant performance optimizations to the communication protocols between the Studio, Controller and Agent components, as well as the storage engine on the Controller. It’s something we continuously work to improve, and the 2018.2 release is a major step in this direction.

As DevOps continues to spread across enterprise organizations, we continue to strengthen our commitment to third-party integrations such as Jenkins, TFS, Jira and others. To support this, we have expanded the REST API to include five new endpoints, listed below. 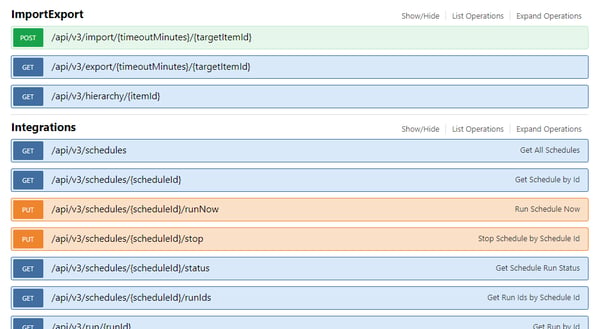 The Export endpoint returns a zip file containing all assets (folders, flows, sub-flows, datafiles, etc.) from a given starting point. If no starting point is supplied, all assets will be exported. The output zip file can be used as the input parameter to the “Import” endpoint or can be imported manually in LEAPWORK Studio.

The Import endpoint is used to import a previously exported zip file to the Controller. The import/export mechanism can for instance be used to move flows from one Controller to another.

The Hierarchy endpoint returns a hierarchical list of all assets. The items in the hierarchy can be used as parameters in the Import and Export endpoints.

The Re-Run endpoint re-triggers a previously run schedule with all assets exactly as they were when the original run happened. This precise re-run capability can be very helpful in some CI/CD scenarios.

The Get Run Item Screenshot endpoint returns the file path to a captured screenshot image (using the Log Screenshot building block) in a flow.

Text recognition is a combination of amazing and annoying; it makes it possible to read text and numbers from simple pixels on a screen without having access to the technology that rendered those pixels. This is incredibly useful when automating virtual desktops such as Citrix as well as 3D software and games. Unfortunately, text recognition algorithms are not perfect. However, using machine learning and neural networks, we can continue to push the boundaries of precision.

In the 2018.2 release, we have included a new version of our built-in text recognition engine, based on Tesseract 4, with a trained neural network. This new engine is selected by default for all new flows and sub-flows, but existing flows and sub-flows will continue to use the old engine.

Note that the mode for the new engine is by default set to “Fast speed” and not “High quality” because the latter can take up to 60 seconds to process a single desktop screen, and the fast mode is almost as precise in most cases.

Also note that for the highest-precision text recognition possible, we highly recommend you use ABBYY FineReader inside LEAPWORK.

The 2018.2 release also includes a number of minor features and changes:

Upgrading from v2.5? Go to the Upgrade Guide

Want to know more about the release? Get in touch!