With the LEAPWORK automation platform, users at all business levels can build web, desktop, and virtual desktop automation in minutes. Cases are designed using flowcharts and can be automated without writing a single line of code. This means that your organization can set up and run automation cases without having to learn a new skill set or rely on external consultants. 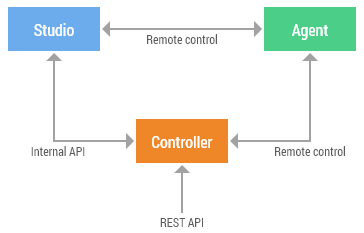 LEAPWORK Studio is a desktop application made for Microsoft Windows. It’s a powerful, visual designer that can be used by anyone in your organization to easily create automation cases, set up schedules to run automation cases on physical or virtual machines, even in the cloud, and dig into the results using dashboards and reports.

The Controller is a service that runs in the background, operating on Microsoft Windows. It hosts and stores all automation assets, such as cases, images, schedules, reports, and so on. It also controls how automation cases are run and on which environments they're run in.

The Agent is a service that also runs in the background, on Microsoft Windows. It is the runtime agent that takes care of executing individual automation cases one at a time when requested by either the Studio or a Controller.

For more information on how to use LEAPWORK, explore our Learning Center.

The three components use different communication protocols to perform their work:

It’s important to note that all three components (Studio, Controller and Agent) can be installed on physical and virtual machines in protected networks behind firewalls and without internet access.

Multiple examples of how to use the REST API to integrate LEAPWORK with ALM systems such as HP Quality Center, JIRA, Jenkins and more can be found in the Learning Center.

The following is a simple example of what a single LEAPWORK Automation Platform deployment configuration can look like, using one virtual machine for a Controller, two virtual machines for Agents and as many laptops or workstations (PCs) with Studio installed as you need: 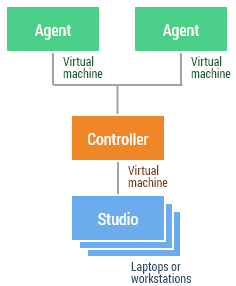 This is the preferred minimum configuration for most companies starting out with LEAPWORK, because it allows multiple team members to work together immediately on designing and preview-running automation cases on their own laptops or workstations (PCs) in Studio. The two Agents are then shared for scheduled execution of the automation cases e.g., in separate test and pre-production environments, when they are finished.

The Leapwork Platform edition utilizes the onboard SQLite database, the Enterprise edition requires an MS SQL Server. An MS SQL Server license is not included as part of a Leapwork license. Any SQL Server edition beyond Express is supported.

For more information about how to deploy LEAPWORK in your organization, please see the Licensing and Deployment page.