How to Use the Data Builder Pattern in Test Automation

The Data Builder Pattern is used to automatically create data in the system under test. In this post, I will show how to apply the pattern using Leapwork to generate data and increase the value of automated test cases.

This Data Builder Pattern was introduced in a presentation by Alan Parkinson and further elaborated in this article by Richard Bradshaw.

The figure below shows the principles of the pattern: 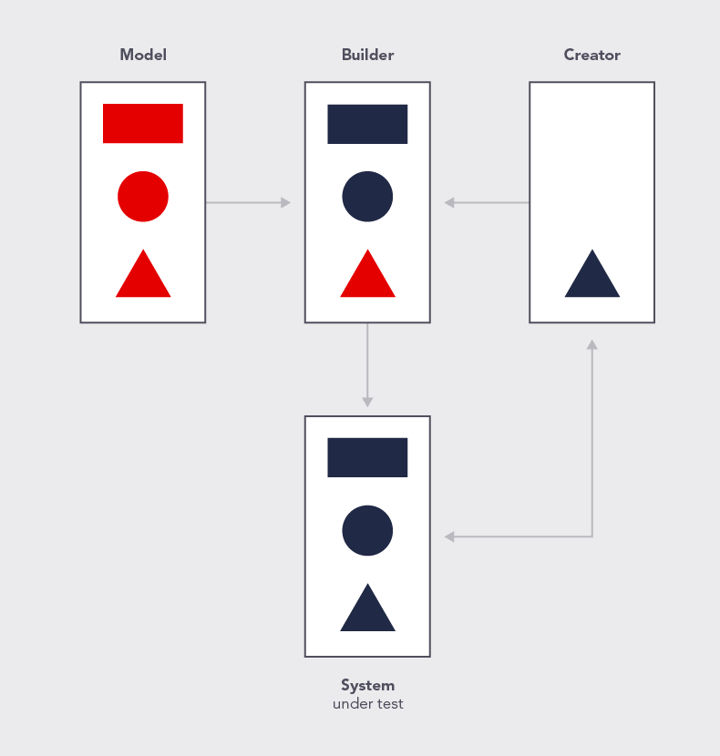 The Creator is the query itself - it can get data from a test repository, create new data in the system under test etc.

Here is an example of using a MongoDB. I have created a customer collection in the Leaptest database on the Mongo server. Using the Mongo console to get all data in the collection gives the following result:

Setting up a ODBC connection for MongoDB and using a "Database" block gives access to the fields found in the query:

The "Command-line" building block can execute everything that can be run from the cmd.exe. This includes PowerShell, which is a powerful tool that can access both databases and API's, and thereby set up the system under test. For example, the script could integrate with an ordering system and return either a list of customerIDs or orderIDs.

The Model is the single text property representing each line in the response from the command. The Builder is the access to the value provided by the command, and the Creator is the script running returning the values from the system under test.

This block could call an API and ask for a set of customers to be created, e.g. users with different roles in the system under test.

The Creator role in this case will be to return a simple result (customerID, orderID, sku etc.) or just to signal that the system under test is ready for the test.

The data range shown above will give a Read Excel building block looking like this:

This approach is not implementing the full Data Builder Pattern because there is no integration/assurance that the data is available or matches the system under test. In scenarios where the test is less bound to the exact data and the system under test scales well, e.g. testing a simple signup form, this method can be useful and easy to implement and maintain.

The Data Builder Pattern is simple, yet powerful and increases the value of your automatic test cases. Leapwork offers various ways of implementing parts of or the whole pattern: direct database access, HTTP requests, command line tools and the more static Excel-based approach.

Data is found everywhere. Whether you are testing an application’s functionality with different data parameters or autom...