The rise of low-code and no-code platforms has played an important role in simplifying programming for the masses. Not everyone has the opportunity to learn how to code, and so, these platforms began to democratize software development.

It all began with some developers that started building tools to visually develop, collaborate and deploy applications quicker, without a lot of traditional hand-coding. It wasn’t until 2014 that Forester named these tools as “low-code” platforms.

This new technology used visual modeling with drag-and-drop interfaces to help both developers and non-developers interact with code easily.

But soon after, we saw the emergence of “no-code” platforms. These were created with the citizen developer in mind. In other words, regular business users and executives who may not know, nor do they need to know, any coding to use the product. No-code vendors anticipate the user’s needs and so the platform has all the necessary features in-built.

Needless to say, this took the corporate world by a storm. Long gone are the days were business users had to depend on their internal IT departments or rely on costly third-party vendors.

What is low-code automation?

Low-code automation platforms allow the user to automate processes in the application with some or little coding knowledge. Normally, the most used components are built-in through visual modules so that users can make use of them easily and quickly. However, coding knowledge is necessary when performing complex or specific interactions.

Generally, they tend to be used by people with some programming knowledge that want to speed up their automation projects. Even though non-technical users may use low-code automation platforms, it’s worth noting that there will always be a need for a technical person to be at hand since most automation projects will need some coding at some point.

All in all, these platforms reduce the amount of traditional hand-coding and so accelerate business productivity as a result. 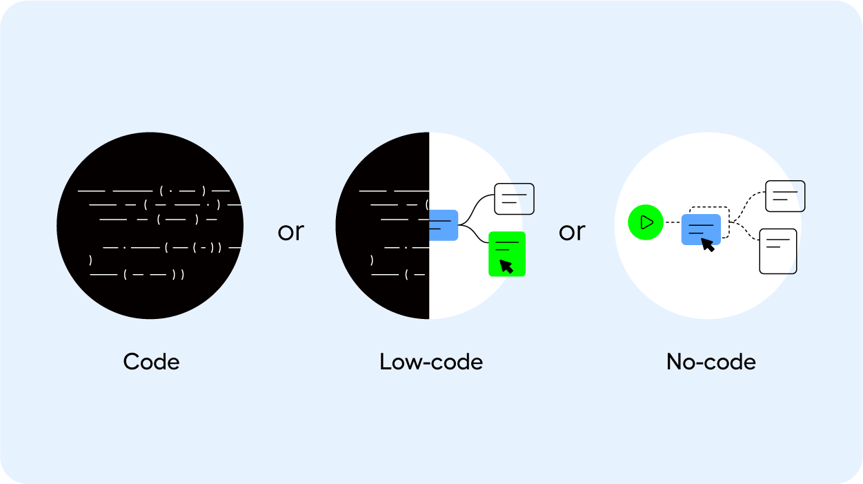 What is no-code automation?

No-code automation platforms allow both technical and non-technical users to automate processes through graphical user interfaces instead of traditional computer programming. This user interface usually involves drag-and-drop boxes that imitate a user's interactions with a computer.

Similar to low-code applications, they are also designed to expedite the automation process. However, no-code platforms completely remove the need for technical know-how. The ultimate goal is to bypass traditional IT development constraints of time, resources and money, to achieve agility in their business processes.

There is a misconception that no-code automation platforms may only allow for simple automation projects due to the platform’s accessibility. However, these platforms have quickly caught up with business demands and now we can find no-code platforms with a high level of feature-richness and integrations that allow users to automate any process that meets specific business needs in any organization.

What are the main differences between low-code and no-code automation?

The distinction between no-code and low-code platforms might seem blurry at first but there are some key distinctions:

Increasing business demands are accelerating the use of these platforms. The low-code/no-code approach is helping business users automate those repetitive, error-prone processes that are stopping them from focusing on high-level, strategic work that adds business value.