All building blocks are available at all time during the design of a flow, but it's important to use the right building block at the right time. In the following some rules of thumb for different application types are described.

The desktop UI blocks can also be used to automate web applications running in IE and Edge browsers, which can be necessary due to security restrictions. 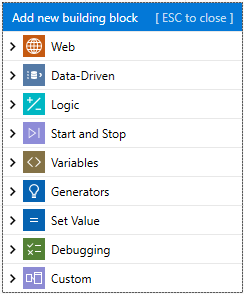 The building blocks exclusive to the Virtual Desktop cases ("Image & Text recognition" and "Mouse And Keyboard") are using Image & Text recognition and are hooking into the mouse and keyboard driver on the machine where the text case is executed, to drive the execution of the automation flow forward. In order to do so, the Leapwork Agent needs to be installed on the machine where the case is running. When an automation flow is executed, the Leapwork Agent continuously streams a video of what is happening on the screen back to the Controller. The Leapwork Agent inspects what is happening on the screen and uses this to drive the automation flow forward. So if you are executing Virtual Desktop cases these can only work on Environments of type "Remote (Agent)". 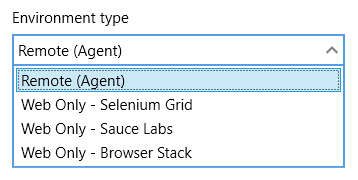 This is also true for the Desktop UI cases, which are also executed via the Leapwork Agent. In these cases, using the building blocks from the Desktop UI category, the Leapwork Agent is using Window UI Automation Framework to interact with both the operative system (Windows) and any desktop application based on Microsoft frameworks (MFE, .Net, WPF etc.). Any Java-based application is supported in a similar way. As for Virtual Desktop cases, the agent is streaming back the result and a video representation of the executing case to the Controller.

The Web Application blocks are using Selenium as the engine and they generate Selenium code on the fly when the test cases are executed. This means that a web case can be executed on all Environments that support/are based on Selenium, which includes the Leapwork Agent as well. If you are executing Web cases it can work on all types of the environment (currently: Remote, Selenium Grid, Sauce Labs, Browser Stack).

When you create schedules you will typically start by selecting a number of test cases to include in the schedule. Depending on the selected automation flows you will only be allowed to select environments that fits all the selected flows. 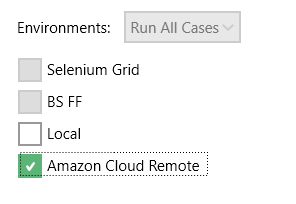 For example, if you have selected one Desktop flow and three Web flows, the Desktop flow will limit the environments available to only the "Remote (Agent)" type.