For many teams, the transition to agile becomes a prolonged, frustrating process that doesn’t deliver the value promised as fast as expected.

Despite the struggle, however, there are steps teams can take to enable a smoother transition.

In this blog post, you’ll read about why agile needs a solid foundation to thrive, how automation and agile go hand in hand, and what makes an automation tool agile.

The first thing to consider is that the transition to agile requires multiple initiatives - all of which are candidates for failure, and which can impact the entire process if approached wrong.

The Scrum framework is a typical starting point for many teams. Scrum is a way of managing the software development process. But processes require more than the right management method to become agile. The processes must be supported by tools that provide continuous feedback, allowing work to move through the cycle at a relatively fast pace.

This is where continuous integration and continuous delivery (CI/CD) come into the picture. A CI/CD pipeline is a set of automated processes that together help deliver the product with a certain flow and continuity.

This means CI/CD requires a lot of trust in the team and the systems, and to become truly agile inevitably involves a cultural mindshift.

In addition to management and culture, the most critical factor for agile success is automation tools. 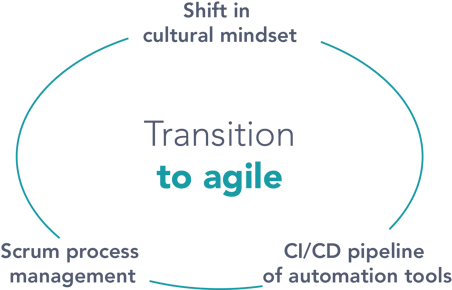 Without automation, teams simply cannot deliver at the speed necessary. Automation in CI/CD means that code can be submitted, versioned, built, tested, and even released automatically. The benefit of this is that teams can shorten the release cycle, release more often, deliver to end-users faster, collect more feedback, and as a result, lower risk of bugs and create better user experiences.

By lowering risk in this way, teams can have higher confidence in their releases, and they can spend more time on experimentation and innovation, rather than tedious manual work and bureaucratic processes.

It is by following this approach that some of the largest technology organizations today can provide their customers with best-in-class, innovative products and services.

You only move as fast as your tests

Continuous integration requires automation tools because it involves frequent (ideally daily or even hourly) integration of code into the code repository and testing of that code at every integration.

Testing is core to quality delivery, but it is also one of the most time-consuming and tedious tasks when done manually. Regression testing is an obvious example here. This is why test automation is essential in CI/CD.

“A team that relies primarily on manual testing may get feedback in a couple hours, but in reality, comprehensive test feedback comes a day–or several days–after the code gets changed. And by that time more changes have occurred, making bug-fixing an archeological expedition with developers digging through several layers of code to get at the root of the problem.” - Atlassian

By automating much of the testing, tests can be executed earlier, providing quicker feedback to developers. For the developer, it’s much easier to fix code that is broken soon after it was written, as it is typically fresher in memory and there’s less risk that other code is contingent on it.

Earlier testing, also called shift-left testing, also helps save resources down the line, as bugs are caught when testing costs are lower, rather than later in the pipeline, where the testing load is often larger and more costly to execute.

In that sense, it’s a bit like building a house: If you don’t secure your foundation before building on top of it, and you don’t realize there’s a fault until you get to the roof, it’s all the more time-consuming, not to mention expensive, to tear the whole thing down and start over.

Why some test automation tools are agile, and others aren’t

The primary answer is that most test automation tools require much time and effort to get started with and maintain. What’s more, they usually require developers to write automation scripts, which tends to create bottlenecks within teams.

Watch the video with Leapwork’s customer Investec to see how they achieved great outcomes and increased agility in their software delivery cycle.

Before Leapwork, their delivery cycles took 3-4 weeks. Leapwork performs the same tests 20% quicker, 24hours a day, letting Investec see a 3-4 times improvement in cycle time, and allowing them to deliver with a significantly higher speed and quality.

Learn more about how Leapwork supports continuous integration and continuous testing in our webinar: Continuous Testing in Agile.