Beginner's Guide to AI and Automation

A lot of companies today have already adopted automation due to its ability to effectively perform tasks at high speed and accuracy. The next step is AI.

Adding AI to automation adds another dimension to the equation and lets these companies do so much more. It brings them towards hyperautomation which according to Gartner is “an unavoidable market state”.

But what is AI actually (in simple terms) and how can businesses use it in their automation efforts to achieve this “next-level-automation”?

In this guide, we’ll give you a basic understanding of AI in automation so that you can utilize its capabilities and bring your automation efforts to the next level.

Watch our on-demand webinar on AI and Automation here.

AI stands for Artificial Intelligence. The idea with AI is to replicate humans on a cognitive level and thereby to enable robots to think, speak and act like human beings.

Today, however, AIs aren’t as smart as many make them up to be. What we have today is a junior version of an intelligence - also called Narrow Artificial Intelligence (NAI).

Siri is an example of an NAI. It can do things like tell you jokes or inform you about the weather. But NAIs don’t do much more than what they’ve been trained to do. They don’t have a conscience, they don’t have feelings, and they can’t think outside the box. In that sense, they’re still very far from replicating humans on a cognitive level.

A better way to describe AIs today is perhaps that it’s a bit like a dog learning to give paw. You can teach it certain things and, at some point, it will understand how to do those things on its own.

In other words, AIs seek patterns and based on those patterns, they ‘learn’ how to perform certain actions.

When explained in this way it of course sounds quite simple but, in reality, it is a rather complex technology, and it’s extremely useful when used in combination with automation.

Learn more about AI in this podcast episode of Decoding Automation, where Florin Manole, Director of AI & Analytics at Leapwork, talks all things AI and automation.

How is AI used in automation?

In many ways, AI perfectly complements automation: Where an automation tool can e.g. transfer data from A to B, the AI capability can interpret that data and respond to it (this is an RPA example, but AI is also very useful in test automation). For many businesses, AI is thus a brilliant way to augment their automation robots’ abilities.

To understand how, it might be useful to look at some different types of AI.

Optical Character Recognition (OCR) is perhaps one of the most utilized types of AI today.

OCR is a basic necessity for businesses that are going through a digital transformation because it allows them to move from paper to digital.

So what does it do? It essentially recognizes letters in a document, which could be either handwritten and scanned or computer-generated.

For example, let’s say that the HR department of a company wants to automate the process of entering data from signed contracts into a database. More specifically, they want certain details pulled from the document that they’ve scanned and entered into certain data fields of their system.

To do this they, first of all, need computer vision, a component of OCR, to locate the text to be extracted. For example, it might locate ‘NAME’ and then pull the text that follows this text.

Once the text has been extracted, it needs to be read. If the name is written by hand, the OCR technology will work to identify the characters, usually with a bit more difficulty. If it is computer-generated, it can read the text with higher accuracy.

Once the text has been read, it can then transfer that text via an automation tool to the desired system. 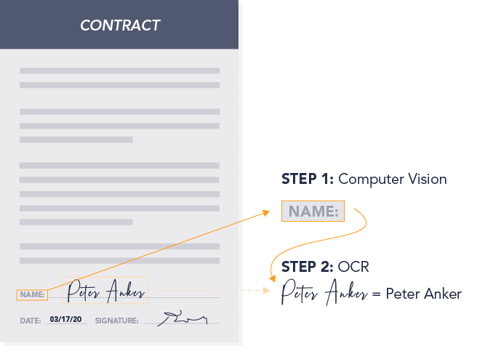 Natural Language Processing (NLP) is another frequently used type of AI. The purpose of NLP is to understand human language, as well as generate it.

NLP doesn’t truly understand humans, however. It understands a few basic properties of text. For example, in the sentence “What is the weather forecast for tomorrow?”, NLP will locate ‘weather forecast’ as the main entity of the sentence, and understand what the intent is (‘what is’) as well as place it in a context of time or direction (‘tomorrow’).

This is the technology that Alexa and Siri use when you ask them about the weather. In both of these cases, there is also another layer of technology that first translates speech into text and then text into speech in order to provide you with a response.

Companies use these technologies in several ways. Next are a few examples of use cases:

Use cases for AI-enabled automation

All in all, these ways of using AI and automation can help businesses save time and resources and improve customer satisfaction levels significantly, as customers receive faster responses.

This is the reason why more and more businesses are looking into AI as a part of their digital transformation. But how are they doing this and what are the implications of AI and automation now and in the future?

AI in test automation vs. AI in RPA

Above are examples of AI used in Robotic Process Automation (RPA). AI does, however also play a significant role in test automation and can add a lot of value to quality assurance.

Learn more about how AI is used in test automation.

Or, uncover the differences between RPA and test automation.

How can you get started with AI based automation?

As AI is becoming increasingly popular, many businesses wonder how they too can get started with the technology and implement it as a part of their digital transformation.

The challenge for these companies is in finding the right business cases for AI, rather than implementing AI just for the sake of AI. Follow these steps to power real improvements in customer experience.

Businesses must identify what it is that they cannot solve with their current set of tools and pinpoint the bottleneck. So instead of saying “everyone is using chatbots, should we too?” ask your customers for feedback on your services and investigate what the best technology is for solving that problem. Are they saying the response time is too slow? Then a chatbot using NLP might help you speed up responses. Or are they saying the quality of responses is low? Then robotic responses are probably not your best bet.

Only when you’ve uncovered the real customer needs should you start looking at the technologies.

Next should be a thorough research phase into which AI technologies to focus on. Here, you might want to bring in expert help as AI is an extremely complex field with many more subtechnologies than those we’ve mentioned above.

Once you’ve decided on your technology, comes another important research phase – finding the right tool vendor. No matter what your needs are, it will pay off in the long run to select a tool that will allow you to work across technologies, and that will enable you to integrate any AI capabilities with your existing tool landscape.

Last is implementation. In this phase it can be a good idea to test your new technologies internally first; employees are usually more forgiving than customers. Start with the small problem areas and learn to solve those efficiently. Once you’ve aced this, you’re ready to scale it up.

Are you ready to use AI in your automation efforts?

What is Intelligent Test Automation & Where Is It Heading?

Organizations want to automate faster, and with higher quality and agility. But this calls for a smarter, intelligent ap...

The 2022 C-suite Guide to AI and Test Automation

The automation industry has seen a rise in AI capabilities. Artificial intelligence has presented itself as a brilliant ...