What is the Difference Between AI and Automation?

AI and automation are two terms that are often used interchangeably, probably because they serve similar purposes: to help businesses operate smarter and more efficiently.

However, there are quite a few differences between the two terms. First, a brief definition is in order:

Next, let’s take a closer look at these independently to get a better idea of their similarities and differences.

Automation is about setting up robots to follow orders; “if I say ‘A’ the robot does ‘B’”. We, the humans, define the rules, and the robots perform them. That’s the essence of automation.

The point of this is to free humans from highly repetitive tasks that are tedious and error-prone.

When us humans perform repetitive tasks, we tend to not only get bored, but also make mistakes. Robots don’t, and can also perform these tasks faster. They also don’t get sick or take holidays, which is of great convenience to employers.

Of course, not all tasks are performed better by robots – which is why we shouldn’t fear being replaced by them. Instead, we should view automation as something that supports us and frees up our time, so that we can do other types of tasks that require critical and creative thinking.

So how does automation work in practice? Well, to set up automation you have to find a way to tell the robot what to do. In order to do that, you have to ‘speak robot’.

There are different approaches to this – you can either code your way through it in a free, open-sourced tool such as Selenium, or you can automate without code with an automation tool such as Leapwork.

See our comparison of automation tools Selenium and Leapwork here.

What is artificial intelligence (AI)?

Although AI and automation help businesses move towards some of the same goals, they are in fact very different. But, put in very simple terms, you could say that where automation is the robot’s arms, AI is the robot’s brains. 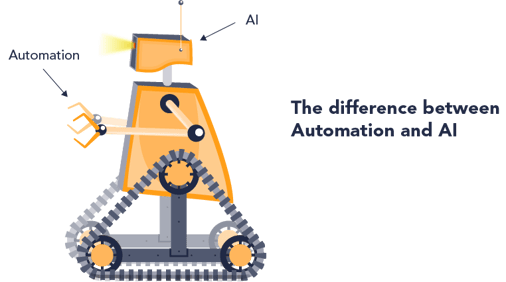 The point of AI isn’t to perform repetitive tasks like automation. Instead, AI is designed to mimic humans at a more intellectual level, and to be able to perform tasks that they learn by observing patterns and past outcomes.

In other words, they’re designed to learn and act on what they learn, rather than merely take orders.

This is why some people see a potential threat in AIs taking over jobs and even becoming so intelligent that they can outsmart humans (like we saw in this sci-fi action film featuring Will Smith).

However, AIs today are still very far from world-domination.

AIs today are also sometimes called Narrow AIs because they are only intelligent in certain areas. This is because they are only trained with certain intentions, and although they can ‘learn’ within this area, they cannot go beyond that. For example, although IBM Watson was able to win a game of Jeopardy, it would not be able to win a game of chess.

You can learn much more about AI and its abilities and limitations in our AI and Automation User Guide or listen to our podcast episode on AI below.

How are AI and automation connected?

Now that we’ve uncovered some of the main differences between AI and automation, let’s take a closer look at how they are similar and how they work together.

A common denominator for AI and automation is that they both run on data; where automated machines collate data, AI systems interpret it.

This is also where the two come together. Because by using automation in connection with AI, you can not only collect and transfer data, you can also understand that data, and base automated actions on those understandings.

How is this used in practice?

Imagine an enterprise that has a customer service center.

Every day, thousands of emails are received by the customer service center – so many that they cannot respond to those emails within a 24 hour time span with their existing resources.

Without adding human resources, the management wants to find a way that customers can be served right away, and either resolve their issue immediately by email or by being put in contact with a customer service person.

To do this, the company automates the email classification process. Based on key words that the automation robot finds in the emails, the robot sorts them into different folders, and assigns them to the right person.

This helps speed up the process, but it still doesn’t allow the customer to retrieve an answer to their request right away. For this, AI is needed.

AI technology, more specifically Natural Language Processing (NLP), which is just one type of AI, can be used to interpret the intent of the request in the email. Based on that interpretation, the AI robot can then send out a response right away that immediately resolves the customer’s problem.

Related article: 4 types of AI that you'll come across in 2021

Learn more about AI and automation and see how you can get started with these technologies in our practical user guide:

The 2021 C-suite Guide to AI and Test Automation

In a soon-to-be-published survey that set out to uncover and compare the state of test automation before and during the ...

AI has, once again, been listed as a key technology trend for the year ahead. But what does this mean for test automatio...