AI is taking up an increasing amount of space in the automation field. This is mainly due to the need to increase automation coverage, free up resources, and speed up processes in software development and quality assurance.

Where automation has for a long time been the only way to do this, improved AI capabilities are now enabling businesses to increase coverage even further.

Test automation is one area in which AI can contribute with various capabilities.

This has for some time raised a question of whether or not testers will be replaced by these new technologies.

To answer this question, and to understand how AI does (and does not) contribute to test automation, as well as if AI is here to help or if it is in fact hyped, we’ll have to take a closer look at testing, automation, and AI one by one and try to shed some light on how they are intertwined.

Related article: AI in Test Automation - 4 types of AI you'll come across in 2021

How does automation contribute to testing?

To understand how automation contributes to testing it might be useful to view testing as a big puzzle with lots of pieces, where test automation is half of the puzzle while human testing (or manual testing, as it’s perhaps more popularly known) is the other half of the puzzle.* 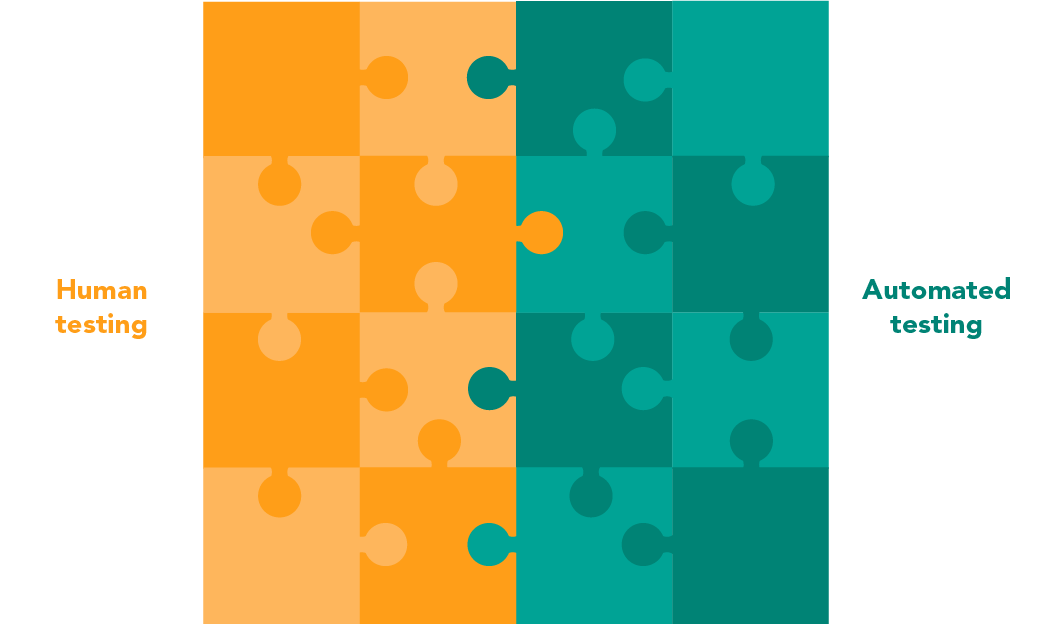 *(In this drawing we’ve depicted automated testing as one half, and human testing as the other for the sake of simplicity, but in real life, the amount of tests that are automated vs. manual will of course depend on the case being tested.)

This depiction of testing and test automation is based on a perception of automation as something that supports testing, not something that replicates it. This is an important point, also in the context of AI based automation (which we’ll get to in a minute).

That being said, automated testing certainly is an invaluable part of the puzzle. Why? Because robots add something humans don’t – they do exactly as they’re told, they do it at high speed and with accuracy, and they don’t get bored of it.

This is why some types or aspects of tests, such as regression testing or test data creation, are typically great candidates for automation.

But robots also don’t do more than they’re asked to do. They don’t have the ability to think critically and creatively, which is why they’re not so good at evaluating or improving tests. This is something humans can and should keep doing.

In that way, you could argue that human and automated testing live in symbiosis – a mutually beneficial type of co-existence.

So the answer to the question of how automation contributes to testing is that it helps free up resources and minimize time spent on things that automation robots might as well be doing, so that humans can spend more time on things that robots cannot do.

And that’s about as close as we’ll get to a general answer. The type and degree of actual contribution depend on what it is you’re testing. It’s a matter of understanding the problems in the context they need to be solved and then seeking out the best technology to solve that problem.

Now that we’ve established what role automation plays in testing, the next question to answer is how AI contributes to test automation.

How does AI contribute to test automation?

The purpose of AI is to replicate what humans do at a cognitive level. ‘Real’ artificial intelligence means that a robot is programmed to think, do, or say as a human being.

However, the AIs that exist today aren’t quite there. Rather, they are what we call ‘narrow’ artificial intelligence. This means that although they can do lots of really cool things such as tell you what the weather forecast is for tomorrow, or give you an update on sports, they can only do that because they’ve been trained to do so. Although IBM Watson can play Jeopardy really well, it can only do that because it’s been programmed to. It can’t win a game of Chess.

Related article: What's the Difference Between AI and Automation?

So what does this mean in the context of test automation?

It simply means that with AI, businesses can achieve more with their automation, but they still can’t achieve everything. And they certainly can’t replace testers.

Human skills are still a very necessary piece of the puzzle. To understand why, let’s borrow a lesson from tester Richard Bradshaw.

Below is two drawings of a rocket. Your task is to spot five differences between the two. 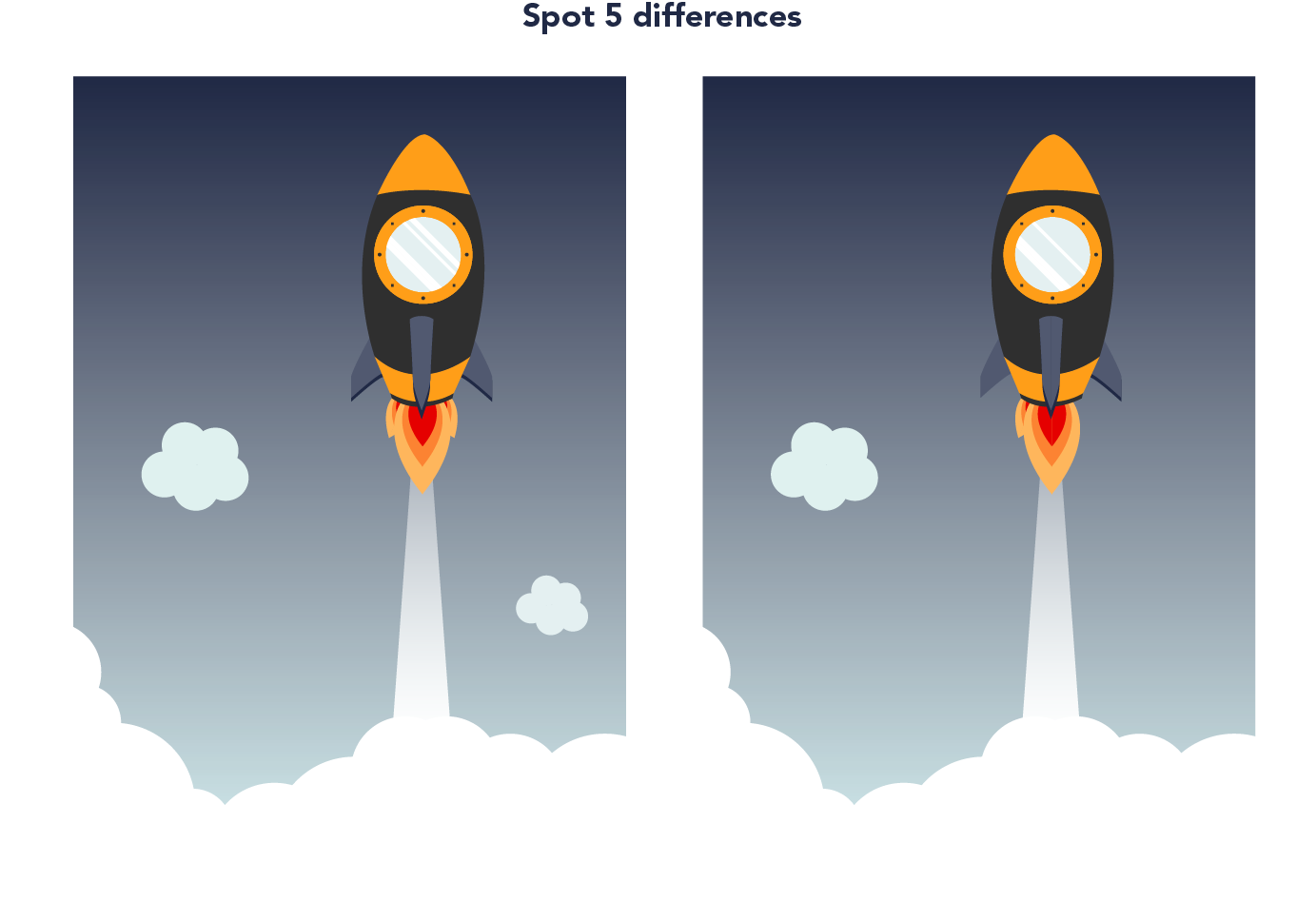 Can you find them? Great. Now remember those differences. Imagine scripting in your brain how you found them.

Done? Now cover up the image on the screen and take a look at the next image.

Now what do you see? Run that same script in your mind and ask yourself if you see any other differences and if that means that you would hesitate to let this one pass, given your task still was to spot the differences.

If you’re like most people, you’ll spot that there’s a 6th difference. For that reason, you won’t approve it.

Now let’s have a look at this same image through the eyes of a robot.

This is what the robot sees: 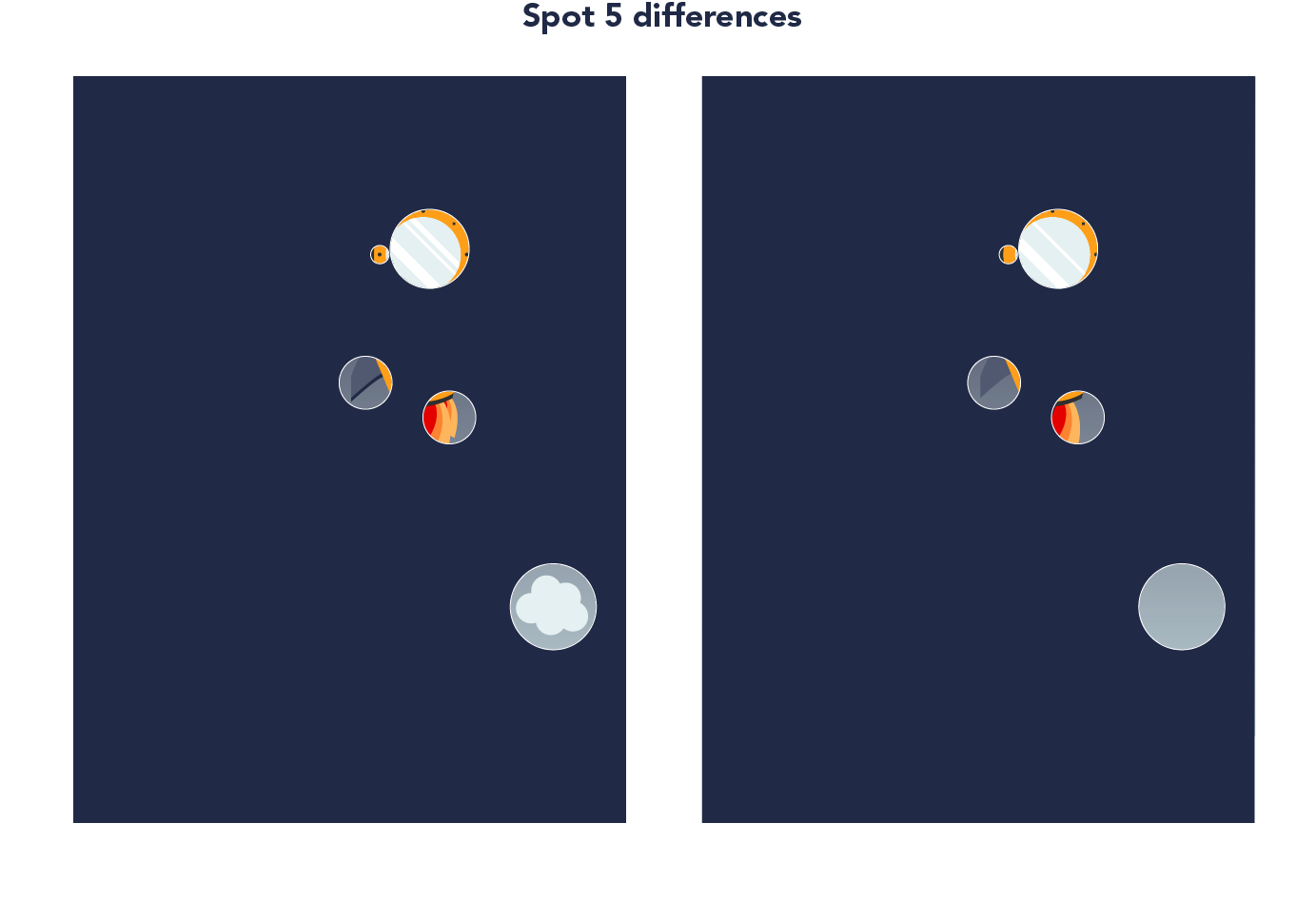 The robot still sees those five differences. Nothing more, nothing less. The robot will therefore have no problem approving this. But any human tester will see the difference and think twice about approving it.

This lesson goes for test automation in general, but it certainly also serves an important lesson when understanding the benefits and limitations of AI.

As humans, we’ll always have the ability to look beyond, to understand things in context, and to think critically and creatively. AIs just aren’t that smart (yet).

Despite this, many still talk about AI as being something magical that has capabilities beyond human beings. In that sense, AI is certainly hyped.

But AI can also help. Particularly in test automation.

Optical Character Recognition (OCR) is one type of AI that contributes immensely to test automation.

OCR is the technology that allows a computer to identify certain visual elements, and thereby verify their presence or absence on e.g. a website.

The uses of OCR, not just in test automation, but also in RPA, are virtually endless. Nonetheless, this technology is an essential part of many businesses’ digital transformation, as it allows computers to read images of typed, handwritten or printed text and enter them as data into systems so that they can be edited, searched, stored more efficiently, and more.

To learn more about OCR and other types of AI, make sure to read our Guide to AI and Automation.

What is Intelligent Test Automation & Where Is It Heading?

Organizations want to automate faster, and with higher quality and agility. But this calls for a smarter, intelligent ap...

The 2022 C-suite Guide to AI and Test Automation

The automation industry has seen a rise in AI capabilities. Artificial intelligence has presented itself as a brilliant ...