QA Automation: What You Need to Know

What is QA automation and what are main challenges it brings? This short article will tell you what you need to know about automating QA.

The challenges of automating QA

How to automate QA

With the increasing digitalization brought about by the global pandemic, QA automation is now at the top of the software testing agenda. But why should you care about it? With faster and faster releases, ensuring a high-quality customer experience is absolutely vital.

Within software development, quality assurance is the process of making sure that software is working as it should. QA testers ensure that in any particular project, the software requirements in place are met.

These projects could involve anything from putting a new feature into a CRM system, customizing a platform, or ensuring that new releases don’t interfere with old ones. The point of QA is to limit the number of bugs in development and production.

Traditionally, quality assurance has been done manually but it is increasingly becoming automated.

That said, the Capgemini World Quality Report of 2021-22 found that only 15-20% of testing is currently being done automatically. Manual testing is prone to error and time consuming, plus it’s harder to scale. And that’s where QA automation comes in.

QA automation (often referred to as test automation) is the process of automating QA – it relies on specialized tools to execute test cases and generate results. It involves writing scripts and then executing test cases.

You might think that QA automation replaces testing engineers, but testing teams still need to write test scripts before software is deployed. There is also still much to be done in terms of creating a testing environment and maximizing test coverage across multiple scenarios.

QA automation has many benefits, but among them are improving product quality, reducing testing time and cost, utilizing resources and suitability for CI/CD integration and DevOps.

The challenges of automating QA

If QA automation sounds like an easy solution, think again. In many ways, coded test automation comes with as many challenges as it solves. That’s mainly because of how much coding is involved to make QA automation happen.

The graphic below shows how the time and resources spent on building automation can in fact outweigh those saved as a result of that automation.

While it is very common for testers to experience difficulties automating their testing process, Capgemini found that 46% of enterprises find it difficult to find skilled and experienced test automation resources in their 2021-22 World Quality Report.

Apart from the difficulty and resources needed toimplement QA automation, it also has an initially low ROI. Programmers are needed to automate testing and when new functionalities are introduced and automated tests break, maintenance tests go up.

Read more: Why No-Code Test Automation Has the Best ROI.

How to automate QA

So how should you go about QA automation if we want to achieve continuous testing, preventing defects in advance rather than putting out fires? It means integrating quality assurance into the software development process. Apart from anything else, you need a good strategy for automating QA.

A way of doing this is by no-code test automation. There are an increasing number of tools that allow you to test without needing programmer resources.

They bring those who know your business better into the testing process by removing the barrier of coding. Bringing more testers into test automation building means increased efficiency and less reliance on manual testing.

Take Leapwork’s visual no-code automation tool for example. It’s intuitive to use for any person, and it lets you get started quickly and easily. Instead of coding, like you would in Selenium for example, you use visual building blocks to automate QA. Have a look at this example of a Leapwork flow. 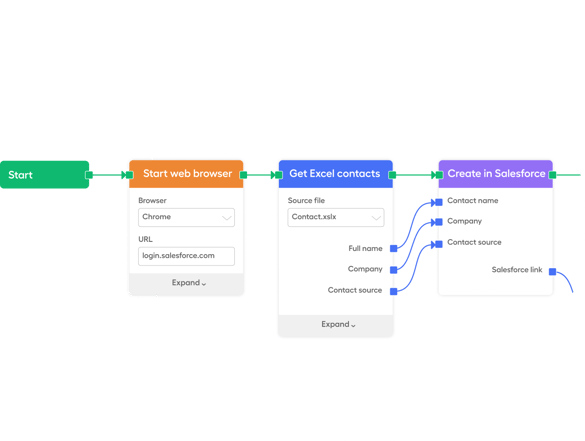 If you'd like to know more about QA automation, watch our webinar on successful test automation. In it, our experts Sune Ensig and Praveen Kumar will teach you how to develop a test automation strategy that is both result-oriented and cost-effective.

3 Challenges That Make QA That Much Harder

Why do QA stakeholders so often have to choose between speed and risk and what are the challenges stopping them from rel...