A Leapwork guide to reducing risk, lowering costs, and driving value with test automation in mainframe.

While corporations transform their businesses to become digital-ready, we cannot forget that many are still reliant on mainframes to run their most critical business processes.

As the pressure to perform and deliver new features and products grows, so too does the need to maintain a competitive edge while still operating on mainframes. But the need to test mainframes tends to hold up the innovation process.

So how can you ensure that your project is not held up in testing, while also finding a solution for testing mainframes that is efficient, without relying on slow and tedious manual testing?

Related reading: Everything You Need to Know About Green Screen Automation

But before we dive deep into the chasms of mainframe automation, what is mainframe exactly?

Mainframe may be a term you’re not quite familiar with. And that’s understandable because there are many terms and concepts associated with mainframes. We’ll briefly dig into those below:

Related reading: What’s the Difference Between AS400 and Mainframe?

How are all these terms connected then? A green screen (otherwise known as terminal emulator software) will run on a PC. It connects to a mainframe emulator, a mainframe, or a mid-sized server. 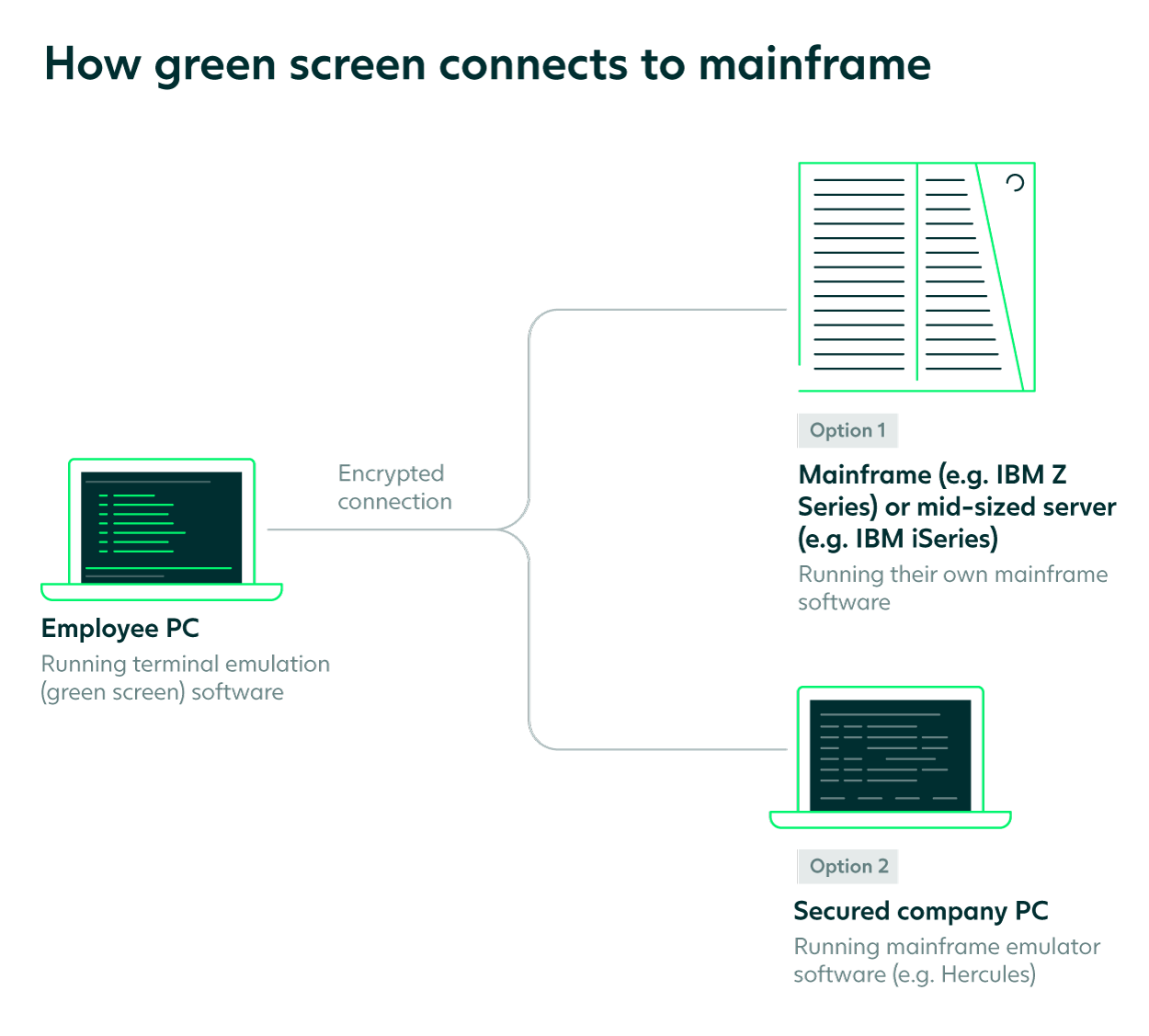 While reliable, scalable, and great at supporting masses of data and transactions, mainframes are slow to change. They have changed very little over the last 20-30 years, and the processes for developing and testing them have also remained somewhat unchanged. This prevents businesses from keeping pace with competitors, and it prevents agility.

In the next section, we cover what businesses are doing to overcome the transition from traditional to modern approaches to testing.

From manual to automated tests: how to overcome common barriers

The pool of available developer resources who can develop mainframes is draining. But the workload and expectations for quality at speed are growing. Manual testing can’t keep up and it forces testers and developers to miss important parts of testing which sacrifice quality.

Related reading: Mainframe Testing & Why Now is the Time to Automate

For banking, financial services, and insurance (BFSI) industries particularly, the transformation towards becoming digital-ready is not an easy one. The processes for testing mainframes are just as old as the technology itself, meaning innovating can prove to be difficult.

To meet the demands of the digital world, mainframe testing and development have to be modernized. One way to achieve the efficiency needed is to move away from manual testing and adopt newer practices and tools, like shift-left testing and test automation.

What is shift left testing?

Shift left testing means testing is done earlier in the software development lifecycle, and more often. The point is to catch bugs before they make it to production so that they are less expensive to fix.

Why are businesses shifting left testing in mainframe?

Shift left testing has grown in popularity within mainframe application testing. This is partly due to the need to find a better and more efficient way to test mainframes, because:

Test automation is the key to successful shift-left testing. It helps businesses test faster, more often, and with higher accuracy.

Related reading: Shift Left Testing for Mainframe: Why and How

Done manually, testing takes time and it is repetitive.

Done with automation, tests take some time to set up, but once they are in place, testers are freed from tedious manual testing. They run 24/7 and can be set to work simultaneously so you can get more test results, faster.

A codeless automation tool cuts down the initial setup even more to reduce the time spent testing. What’s more, anyone has the ability to set up testing as you don’t need to script to build an automated test. By removing the dependency on code, teams can complete their release cycles quicker.

When manually testing, it’s impossible to get good enough coverage to be sure that your system is working as it should.

With code-based automation, the time it takes to build a functioning script and the maintenance required can often outweigh the benefit of using automation altogether. It can quickly become a time sink.

Codeless automation makes it possible for testers and business people to set up tests, run them, and maintain them with ease. Developers have more time to spend on mainframe development because they’re not building and maintaining test automation. Testers have more time to spend on exploratory testing and test design. As a result, quality is improved. 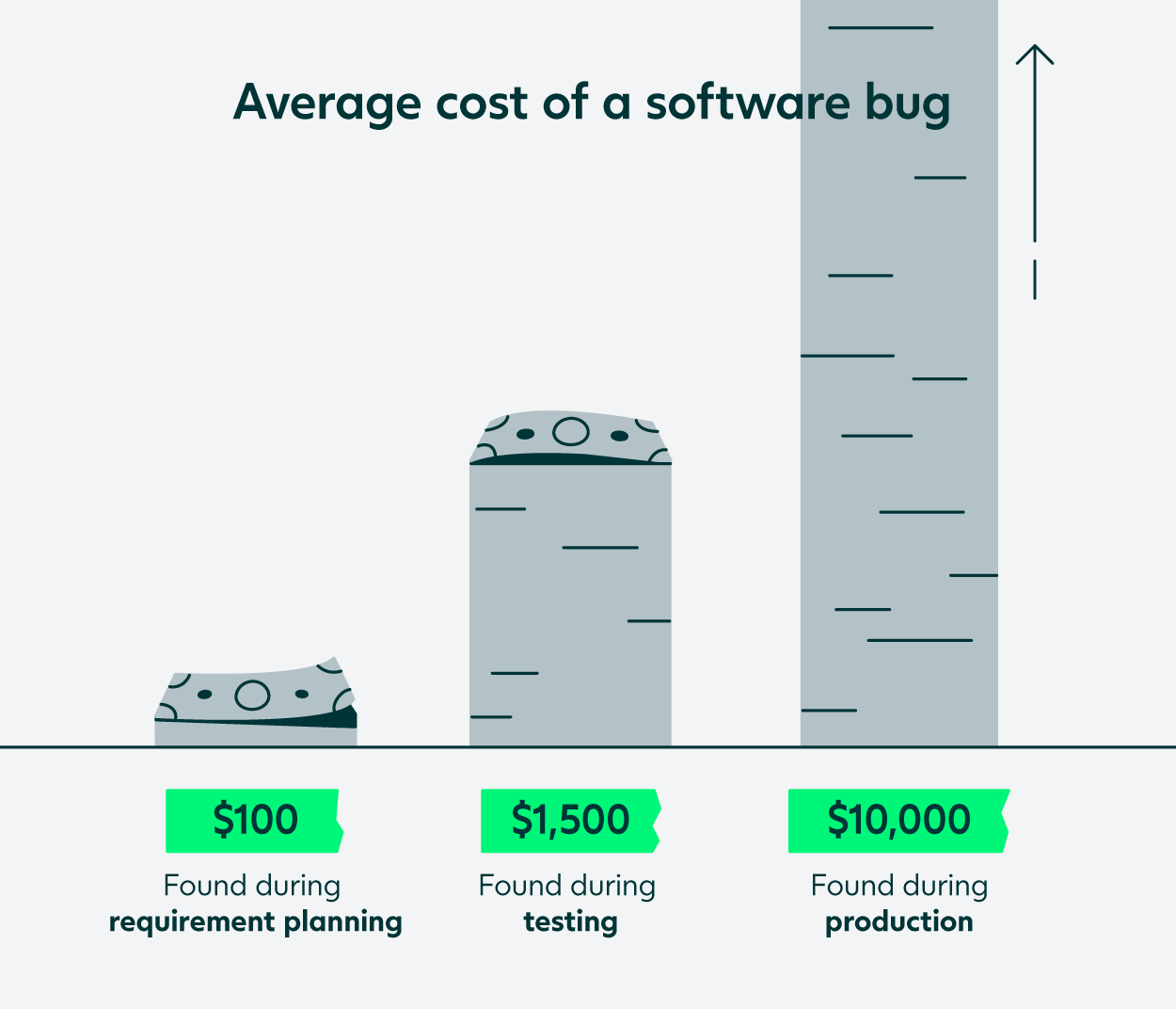 Coupled with codeless automation, defects are found earlier and faster, and developers are able to avoid building on top of broken code. This results in a transition away from outdated approaches to development, and towards more efficient, cost-effective releases with higher quality and lower risk.

To many, however, testing earlier and test automation don’t go hand in hand.

The test automation paradox is the inability to set up automation until test cases are complete. It takes a long time, and it depends on resources that most teams can’t justify.

That doesn’t mean that test automation can’t bring you faster testing, a better quality mainframe system, and reduced costs. It can, but it requires the right culture, processes (like agile and DevOps), and tools.

However, without automating mainframe testing:

In the following sections, we'll explain what options are available for testing mainframes with automation.

Get the Green Screen Testing Guide

Curious to learn more about green screen automation? In this guide, you'll read about why test automation is critical for mainframe and midrange servers and how to get started.

To be able to automate mainframe green screens you need an automation framework or tool which either relies on Optical Character Recognition (OCR), code, or built-in support for terminal emulators.

An automation framework is commonly code-based and requires coding language to build. This makes them more resource-dependent than OCR or built-in terminal emulator support.

We’ll describe these two approaches in more detail below:

Can Selenium be used to test mainframes?

One common query is whether Selenium can be used to test mainframes.

Related reading: Can You Use Selenium to Test Mainframes?

While it is possibly the most well-known open-source testing tool, it cannot be used to automate mainframes. This is because Selenium can only automate web-based applications, not mainframes.

However, there are alternatives that give you the same capabilities, while also working across web, mainframes, and desktops.

What types of mainframe green screen tests should you automate?

While there are lots of ways you can automate mainframes, you also need to consider what you should and can automate. From unit testing to regression testing, we detail these below.

Related reading: How to Do Test Automation in Mainframes

What capabilities should a mainframe test automation tool have?

The transition to becoming digital-ready can be challenging, especially when the same processes for development and testing have been relied on for decades.

But there are steps that can be taken to make sure that the transition to modern mainframe testing goes smoothly.

Part of this transition encompasses the type of automation tool you use for testing. This has a large influence over how fast the transition will be, the quality of development going forward, and how the time and skills of your team are distributed to achieve an agile mainframe development model.

The two most important capabilities to look for are:

With the right processes and people, mainframe development and testing can produce better results. The development timeline can be shorted, quality will improve, and critical errors will be discovered before they make it to production.

Leapwork's codeless automation platforms help businesses automate with ease, and faster. With an intuitive visual interface, you can automate across technologies, whether it's on green screen, desktop, or web.

You can learn more about codeless test automation with Leapwork in our on-demand webinar: overcoming the challenges of automating green screen testing. 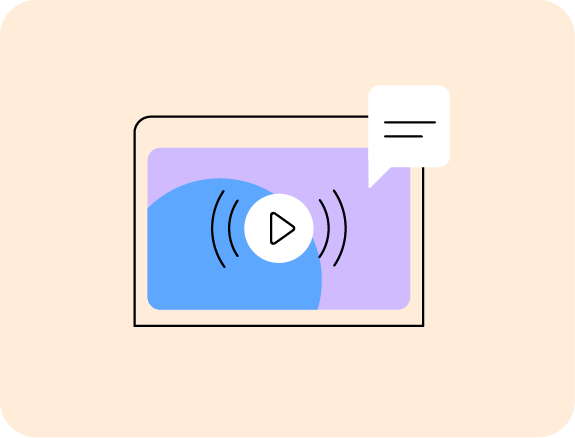 Learn about the challenges faced by QA teams when working with green screen, how Leapwork's no-code approach, complete with a Green Screen Recorder, offers intelligent field and table recognition for increased speed, ease, and reliability of test automation.