Empowering enterprises to take a huge step forward in productivity

Better management and control of your test and process automation

In this first major release of 2020, we bring you a number of enterprise features that will help you to take back control, whether you want to do more software testing faster or speed up and reduce risk in business processes.

In a year that has so far brought with it so much uncertainty, these are timely additions that will support you to take back control and become more productive and efficient with automation.

For more information about getting started with the 2020.1 release of Leapwork, please contact your account manager or send an email to sales@leapwork.com.

Whether you are doing test automation or RPA, run lists are quite simply a better way to manage and organize how your automation flows are executed, using a powerful drag-and-drop interface.

Group together and sort those flows that must be run before or after others, manage any dependencies and select the success criteria required to move from step to step. 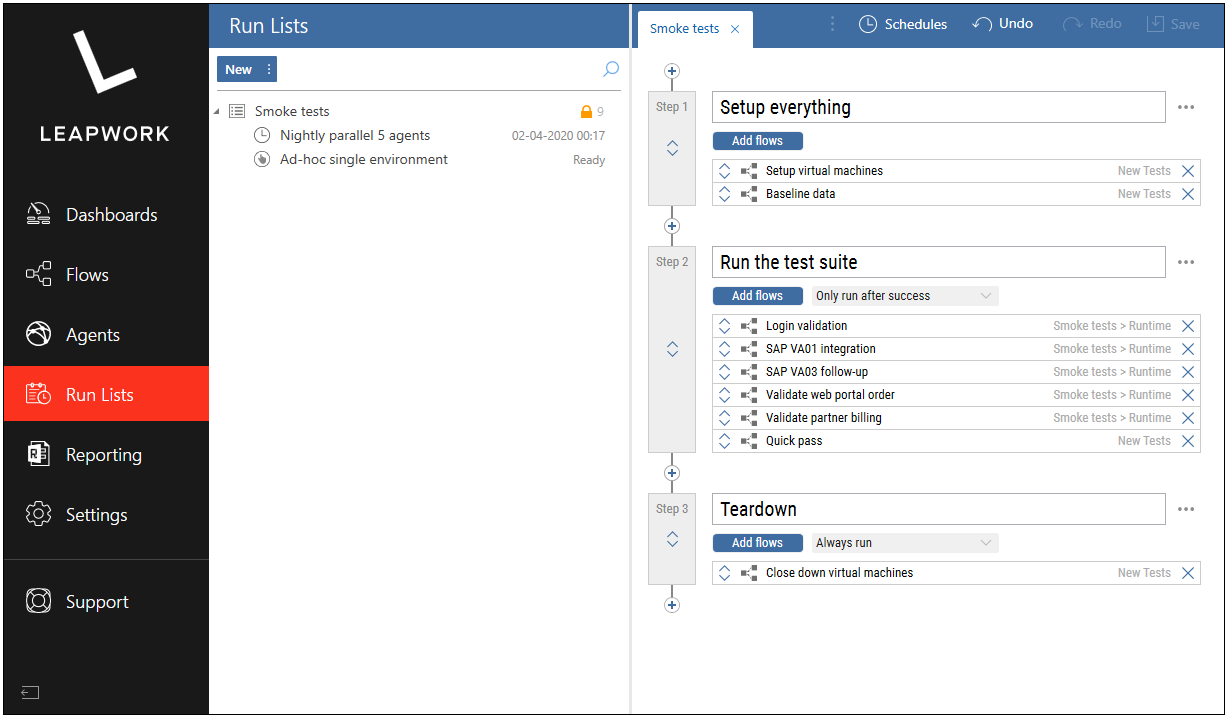 Run lists bring a lot of flexibility to the table. Among those are the ability to:

Run lists are available in both Leapwork Enterprise and Platform Editions.

Managing when to run with a new advanced scheduler

We are introducing a brand-new advanced scheduler to go hand-in-hand with the run lists. This gives you full control over when the flows in your run lists are run, and on which environments - either on-demand (such as through API calls to Leapwork) or on a single or recurring schedule.

The new advanced scheduler is a powerful tool for taking control over your automation and optimizing time and resources. Among many things, it includes the following:

The new advanced scheduler is available in both Leapwork Enterprise and Platform Editions.

For the Enterprise Edition, starting with an update to the 2020.1 release in May, the advanced scheduler is expanded with a calendar overview of your Agents usage - both past and future - to help you plan better and understand resource utilization in minute details.

The schedule assistant uses the calculated estimated run time for each run list, so it’s easy to understand which Agents are expected to be busy or free at a given time in the future. And when some runs end up taking longer than planned, the schedule assistant gives a quick and visual calendar overview of how run lists are being queued up on your individual Agents.

The new schedule assistant is only available in the Leapwork Enterprise Edition.

Leapwork Agents now include a strong security feature to automate logging in and out of Windows. A user is no longer required to be logged into their machine in order to run a flow. Instead, Leapwork can be set up to login on the user’s behalf. Users can also start testing single-sign on between Windows and any other application that reuse the same login credentials.

This means you can now execute automation on any machine in an incredibly secure and robust manner.

To enable this behavior, building blocks to ‘login’, ‘logout’ and ‘lock sessions’ have been added:

Agent settings also now include an option to either manually or automatically login using a Windows account, and optionally lock sessions automatically after disconnecting from Agents: 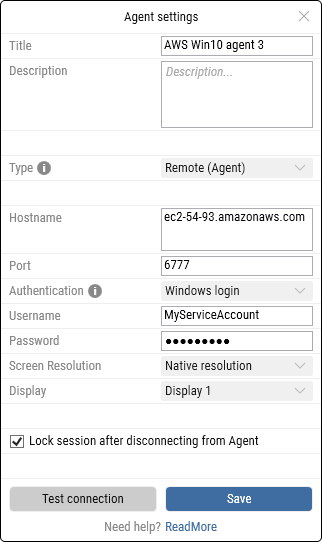 This login and logout functionality works even with machines that have just been started or rebooted, without any prior user sessions, from Windows 7 SP1 and onwards. This makes it very easy to automate tasks on virtual machines and automate testing of complex, data-driven single-sign on (SSO) scenarios.

Note that the functionality is based on a Windows “credentials provider” which does not circumvent any security measures in Windows; it simply lets Leapwork interact directly with the login/logout security feature built-in to Windows.

With this new security addition, support for Leapwork Agent passwords will begin deprecation and is expected to be removed from the product before the end of the year.

On top of the major features described above, the 2020.1 release also features a number of changes, including the ability to globally rename sub-flows, new API endpoints, and multiple other improvements.

The 2020.1 release includes a number of improvements to “locator” patterns for finding complex web elements such as custom drop-downs in Salesforce and Dynamics AX. The release also includes improved handling and performance in other web applications with very heavy DOM structures.

Based on a lot of feedback from you and because it was just generally a confusing term, we have renamed the “Environments” section in LEAPWORK Studio to “Agents” and updated the REST API with new endpoints to reflect this as well: 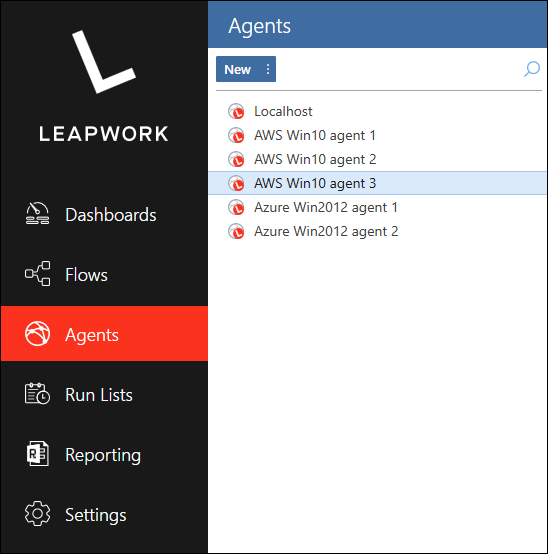 Changes to the REST API

The REST API has been updated with version 4 endpoints to support the new run lists and advanced scheduler, as well as the transition away from using the term “Environments” in reference to Agents. 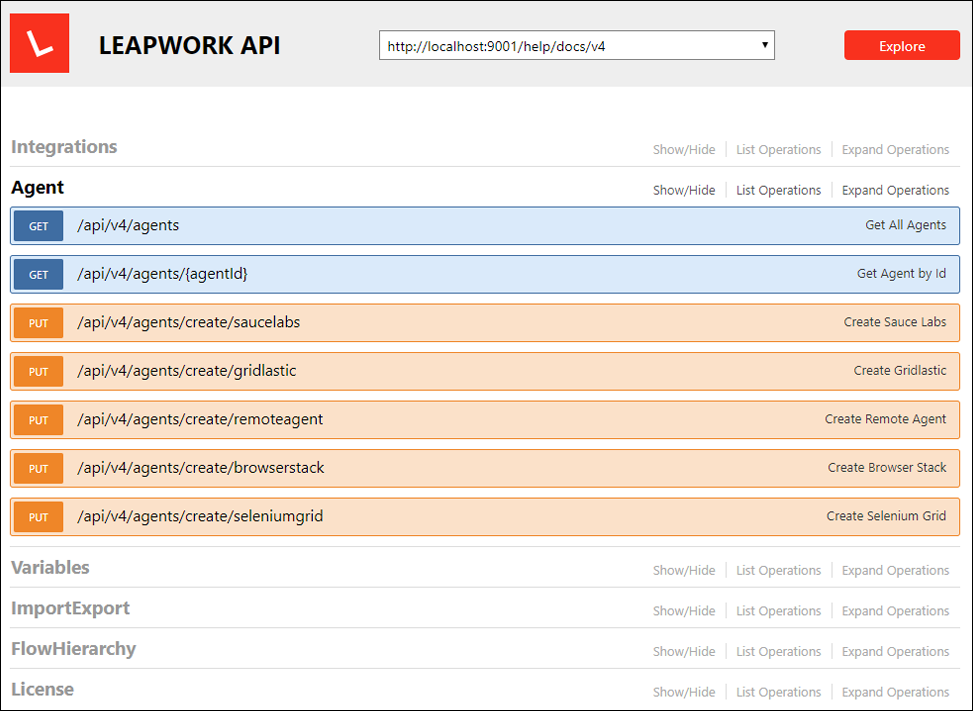 As a result of the introduction of version 4, version 3 of the REST API will begin deprecation and is expected to be removed from the product before the end of the year.

It is now possible to rename sub-flows globally from the asset tree by right-clicking and selecting “Rename” or pressing F2. It should be noted that only sub-flows that have not been locally renamed in individual flows (by double-clicking on the building block title) will be renamed.

The Enterprise Edition of Leapwork, which is built for Microsoft SQL Server, now also supports running on Azure SQL Service, the Platform-as-a-Service (PaaS) offering from Microsoft. This comes on top of the existing support for on-premise and cloud deployments of SQL Server in Infrastructure-as-a-Service (IaaS) offerings from all vendors.

The 2020.1 release includes a lot of improvements to performance as well as many bug-fixes to underlying systems. For this reason, Leapwork needs the .NET Framework 4.8 to run. For more information about system requirements, see this KB article which includes a download link for the .NET Framework.

In the 2020.1 release, we have resolved the following customer incidents:

Major releases are typically released two to three times a year. The latest major release is 2020.2.

Minor updates, bug fixes, and patches, are bundled together for release when ready.