In this service release, we have provided some optimizations to Leapwork's recent major release. These include:

The 2021.1 release, which this service release builds upon, introduced the following features and enhancements:

Facilitating fast maintenance of existing automation has always been a defining Leapwork feature. In 2021.1, we’ve made improvements to the way you preview and debug flows that will increase the speed and efficiency of the maintenance process even further.

Crucially, these new capabilities will be applicable to sub-flows too, which means maintaining re-usable shared assets has become significantly easier. 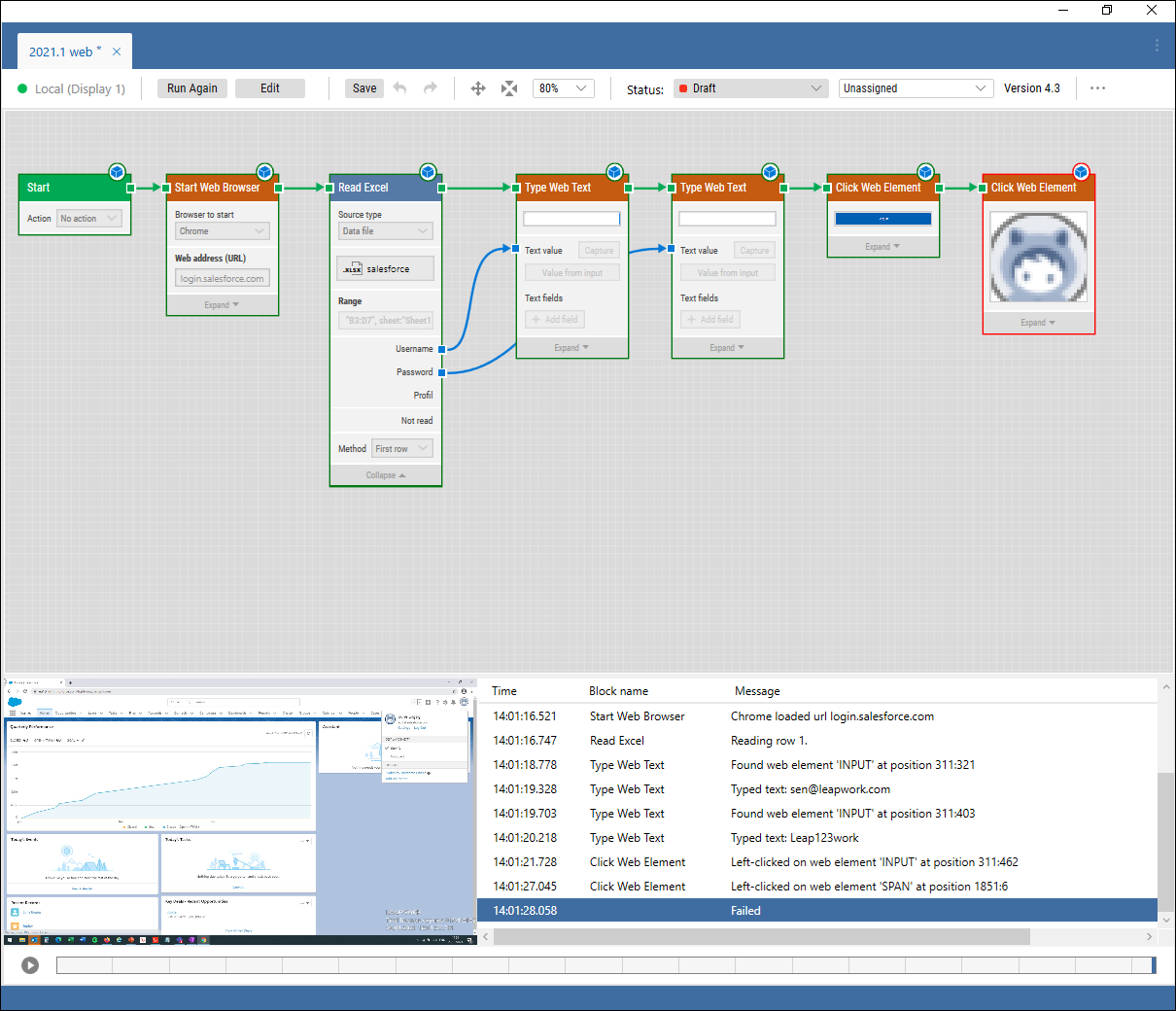 You can now preview an automation run directly from the Leapwork design canvas to see automation outcomes instantly. Just as before, when a flow is previewed, a video recording of the platform under automation will play alongside the corresponding Leapwork activity log and highlighted building blocks.

Now, however, every building block will include a “data-item”, which reveals critical insights relevant to that specific building block’s activity as part of the flow. New accessible insights include:

This means it’s not only straightforward to identify which element of the flow has failed, but it is now quicker to diagnose why - on a data level - it has failed: 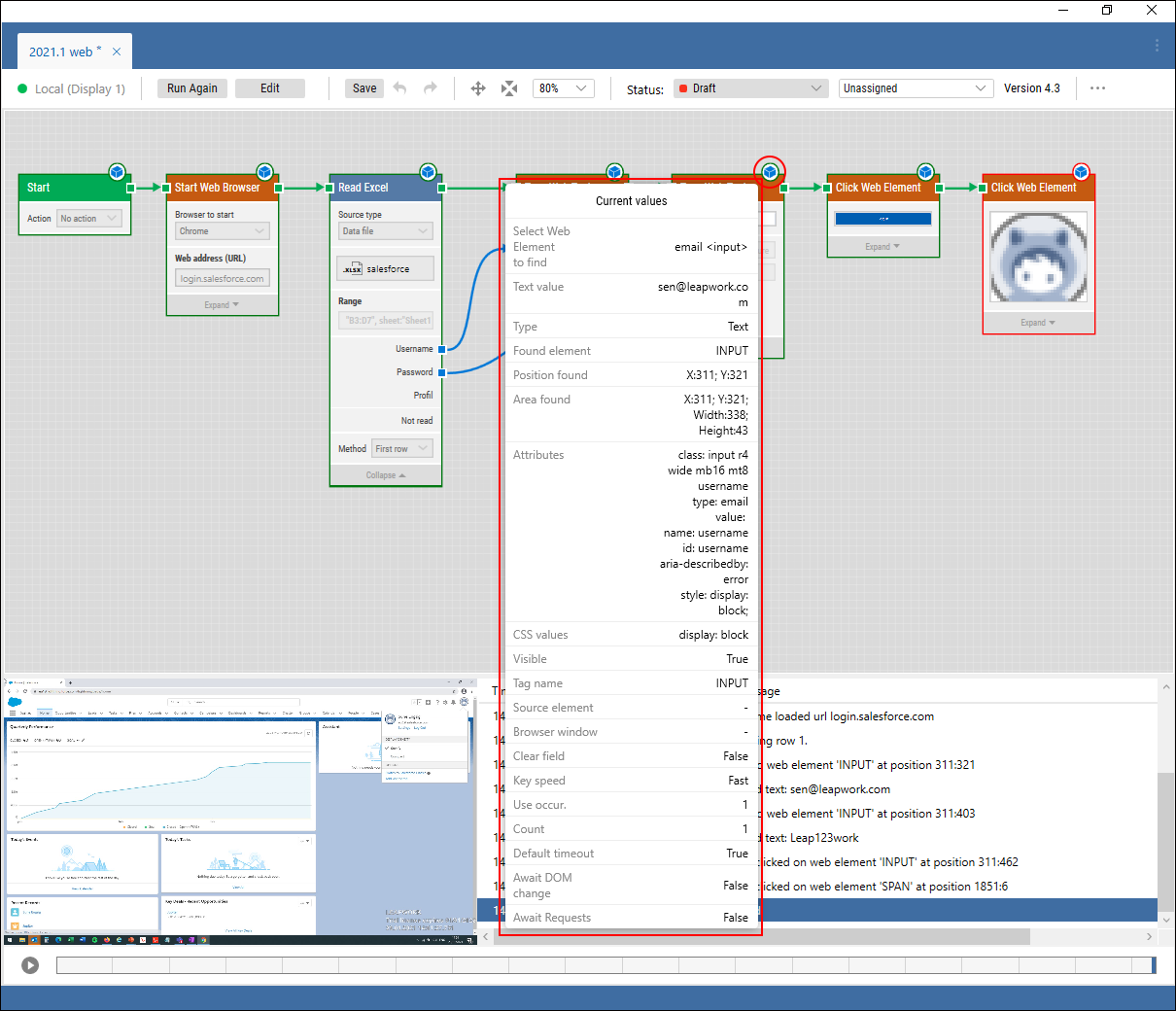 The preview run can now also be paused and resumed at any time, allowing you to do your analysis/inspection of recent changes immediately – you do not need to wait for the flow to complete the run.

Leapwork also includes new “run to here” and “run from here” options, making it easier for users to understand and inspect how automation flows behave to or from a certain point. 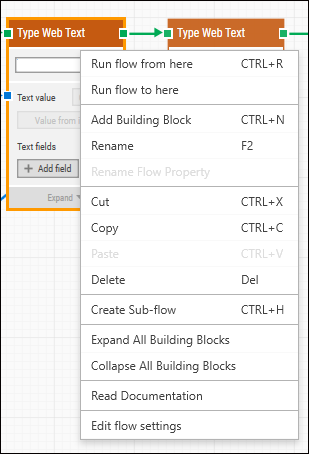 Leapwork now makes it possible to pause a running flow during execution. In the new preview window, users will see a “Pause” button, which can be used to pause the live execution of the automation flow. In pause mode, Leapwork will maintain the connection to the automated application whilst users can perform design verification and troubleshooting, live.

It has historically been more challenging to maintain sub-flows, especially when multiple nested sub-flow layers exist. Leapwork solves this by applying all new debugging capabilities to sub-flows too. Run sub-flows to/from a specific point, pause sub-flows to inspect outcomes live, dig into deeper insights using the new Leapwork data containers available on every sub-flow building block – and of course, benefit from the visual recording and corresponding data log as before to easily identify and resolve errors as you go.

The features are available to both Platform and Enterprise customers.

Track progress and responsibilities easily, with the new Leapwork toolbar

Workflow Management functionality will present itself in the new Leapwork toolbar, which users will now find at the top of the Studio canvas. Here, you can track and manage revision state, assignee, and version numbers.

For every change a contributor makes, the flow or sub-flow can be saved to the correct state (“in draft”, “send to review”, “publish”, “retired”) and assigned to a different team member with the correct role to review and approve. The ability to publish or retire flows is permission-based.

Users can also click to reveal version history for a more detailed inspection of flow status and activity.

Crucially, this means it is now possible to configure run lists to only use the published version of a flow. This enables users to edit or mature flows using minor versioning whilst the published flow runs as usual, and helps to prevent someone accidentally introducing changes to published flows that override edits made by other contributors.

Administration of workflow status and assignees

To make it easier to manage larger or multiple teams, administrators can configure workflow settings so they are team specific, exclude “Ready to review” as a draft status, force comments on each status change, and more.

Filtering flows in the asset tree

To give immediate insight into progress, the version state is also visible in the asset tree on the left-hand side of the design canvas. You can now filter flows by assignee and progress status, or begin the day by filtering the asset tree to show only flows assigned to you. This makes it easy to review flows and either approve for production and publish or return them to the senders with instructions for improvement.

Bulk updates of status and assignee

To accelerate the transition to Leapwork's new workflow management setup, administrators can conduct a bulk update of assignees by selecting a group of folders and flows then assigning to a user/users. Administrators can also:

Workflow Management, role-based governance, and extended version control are available in the Enterprise Edition only

“Freeze Run Lists” provides absolute version control by enabling users to lock or “freeze” run lists and their associated automation flows. A locked version can be viewed at any time, and used by QA teams to assert that a flow approved in a given context remains unchanged. This way you can rest assured that flows approved are locked in a tamper-proof condition, and that overall test case validation is robust and secure.

When the “Freeze Run List” option is used, the run list will be turned into a read-only state with running capability. In this read-only state, a time-stamp is added alongside a duplication button. It is not possible to edit a frozen run list, instead users must create a duplication and work from the copy.

Once a run list and its flows have been frozen, it is still possible to change the way it is scheduled and executed to account for evolving requirements and environments. However, no matter how you re-run it, a frozen run-list will always retain its chosen configuration.

Freeze Run Lists is available in the Enterprise Edition only

All additional improvements are available to both Platform and Enterprise customers.

If you have any queries, please contact your Leapwork Customer Success Manager.

Major releases are typically released two to three times a year. The latest major release is 2021.1

Minor updates, bug fixes, and patches are bundled together for release when ready.