How to Optimize Software Testing Resources

Automated functional testing and live monitoring of business-critical desktop and web applications built with technologies such as SAP, Microsoft .NET, Salesforce, ServiceNow, WordPress, and many others is a considerable challenge for traditional, code-based test automation tools.

It not only requires building up a sophisticated understanding of the technology, code frameworks and development methods used to build the applications to be tested. It also requires learning either a proprietary scripting language or having professional experience with a programming language such as C#, Java or Python.

And even after all that, it still takes time to build up proficiency in the automation tool chosen for the task. 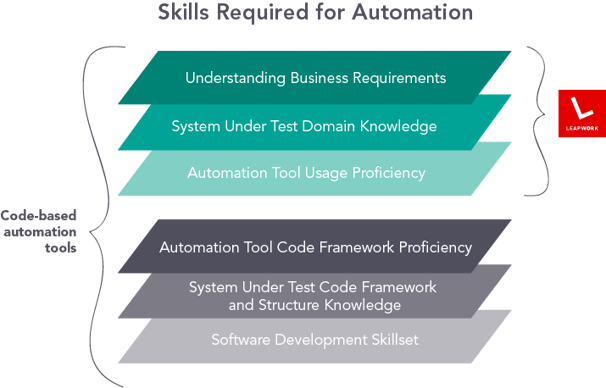 At Leapwork, we think almost everything about that whole process is just wrong, and we're working hard to do something about it.

Leapwork is our answer, and it works in a completely different way. Test automation cases are built as visual flowcharts by connecting easy-to-use building blocks in our visual designer tool called Studio.

You can capture anything on screen and insert it into a case with one click. It’s very intuitive to work with, requires no technical knowledge, and it's lightning fast.

By looking at the entire screen, including anything shown in a web browser, in a desktop application or rendered inside a Citrix window, and by performing advanced image and text recognition (IR and OCR), we can automate any application with Leapwork.

There’s no proprietary scripting language and no technical IDE such as Visual Studio or Eclipse to teach your testers.

There are no XPath codes to spend hours handcrafting, nor are there any HTML or Javascript tricks to memorize.

Instead, Leapwork offers you powerful building blocks for all the common tasks needed to automate any application, such as moving the mouse around, clicking on text and images, typing on the keyboard and reading things like text and numbers from the screen.

Testers can focus on the important things:

That way, testers can stay focused on the requirements and eliminate weeks or even months of nonsense from a project’s delivery schedule.

What is a Test Automation Strategy?

With increasing agreement that automating the testing process is a good idea, there’s one thing that’s for sure: there’s...

What is Scriptless Test Automation?

Experiencing error-prone software, downtime, a loss of revenue, and a negative perception of your brand? Then you might ...

What is the Difference Between Manual Testing and Automation Testing?

Broken software leads to unhappy users and lost revenue, so testing it to make sure it works correctly is a must. Softwa...