We’ve all heard about famous software outages over the last few years. They have caused massive companies to suffer a loss of revenue and a worsened brand reputation. That in mind, we couldn’t blame you for worrying about software risk in your own company. But how do you quickly create risk awareness in your company?

To create risk awareness, we need to make risk tangible. Risk can sound like an abstract idea, but what is actually going to happen if you don’t test software properly, or patch test it after release?

This post will explain how to identify how poorly tested software presents risk. 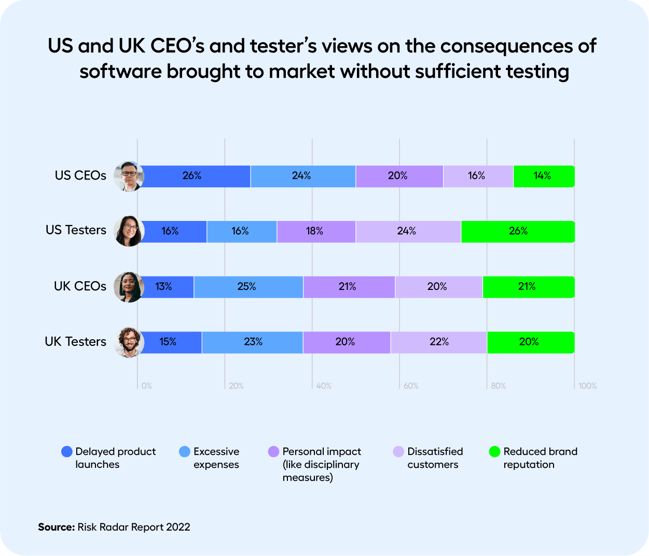 If you release software that hasn’t been tested properly, that can lead to product launches being delayed.

When people in QA adopt a culture of patch testing after releasing insufficiently tested software, fixing that software becomes a problem in itself.

It’s time consuming and it stops new releases getting to market at speed in a competitive environment.

Read more: How to Achieve Agile Testing with Test Automation.

It doesn’t only take time to patch test broken software and deal with outages, it takes resources too. Your team is going to have to put in the hours to fix broken software.

Because most test automation is done using code, you need developer resources to fix problems and run tests.

When there are problems with scripted tests, or new releases cause old automated tests to break, it’s going to require developer resources.

With a codeless test automation model like Leapwork’s, you can limit the expenses associated with software risk. That’s because automating testing by writing code involves implementation, heavy maintenance, and understanding why a test has failed.

Read more: Why Codeless Automation has the Best ROI.

It might sound obvious, but a customer isn’t going to be happy when they try to use your software and it doesn’t function as it should.

And why fear dissatisfied customers? It’s eventually going to lead to them using one of your competitors instead.

Dissatisfied customers will also lead to your brand reputation going downhill. Across industries, people want to know that your brand is reliable and without faults.

Just think of some of the software outages that have happened over the last few years and how they have damaged companies’ reputations.

Leapwork’s 2022 Risk Radar Report found that over half of CEOs and just under half of testers thought that the past software failures had impacted their company’s reputation. 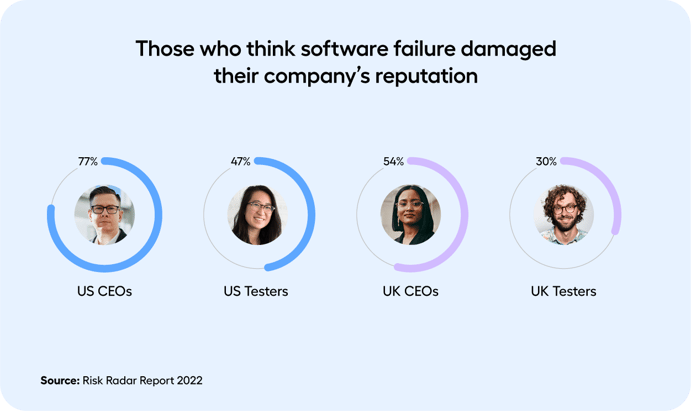 When software breaks, releases are delayed or outages have massive consequences, it isn’t only companies that suffer. It’s individuals too.

Leapwork’s 2022 Risk Radar Report looked into what CEOs and testers view to be the consequences of poorly tested software released to market.

Among other stats, it showed that 95% of US CEOs fear losing their job in the event of a software failure.

However, this doesn’t necessarily mean that everyone in QA is aware of the consequences of software failure for individuals.

There’s also a possible knock-on effect here – software failure can trigger a kind of blame game where no QA stakeholder is safe.

If the reason that bugs are released is because of your testing approach, it may well be an individual who ends up getting the blame…

Leapwork’s 2022 Risk Radar Report offers a detailed look at the state of risk awareness in QA and the consequences of poorly tested software. Download it below!

3 Challenges That Make QA That Much Harder

Why do QA stakeholders so often have to choose between speed and risk and what are the challenges stopping them from rel...

QA Automation: What You Need to Know

What is QA automation and what are main challenges it brings? This short article will tell you what you need to know abo...