How to Reduce Risk with Codeless Test Automation

The risk of bugs and software outages has only increased with digitization and the pressure to release software updates to keep up with competition. While risk awareness in QA is improving along with the desire to automate testing, automation isn’t being used to its full potential.

This short article will explain how codeless test automation can help you to reduce risk.

Over the last few years, high-profile software outages have been shown to affect a company’s brand reputation, customer satisfaction levels and bottom line.

At the same time, Leapwork’s 2022 Risk Radar Report showed how a culture of releasing poorly tested software to market and patch testing it later on is leading to bugs and outages.

But why is this the case?

In Leapwork’s 2022 Risk Radar Report, a noticeable finding was that testers and CEOs thought that an over reliance on manual testing was a big reason for poorly tested software being released.

Around 4 in 10 CEOs (40% in the UK and 39% in the US) cited reliance on manual testing as the main reason software is not tested properly.

Because manual testing is so time-consuming and prone to error compared to well-planned test automation, this does not come as a surprise.

However, it does underline the degree to which reliance on manual testing heightens the risk of software failure. When testers spend their time on repetitive tests, they don’t have the time to do the testing they need to in order to prevent bugs.

Reliance on manual testing is the main reason why software is not sufficiently tested prior to release.

Manual testing is a problem because it’s so resource-heavy and time-consuming that it introduces unsustainable delays.

As a result, organizations are forced to make terrible choices: cut corners, not test all their software appropriately, delay release until testing can be accomplished, and potentially miss the market window, losing momentum, and sharing to competitors who released their products earlier.

The problem with scripted test automation

Another thing the Risk Radar Report showed is that the vast majority of QA testers agree that test automation software will improve productivity.

As shown in the graphic below, across the board, the most common approach as things stand is script-based testing. 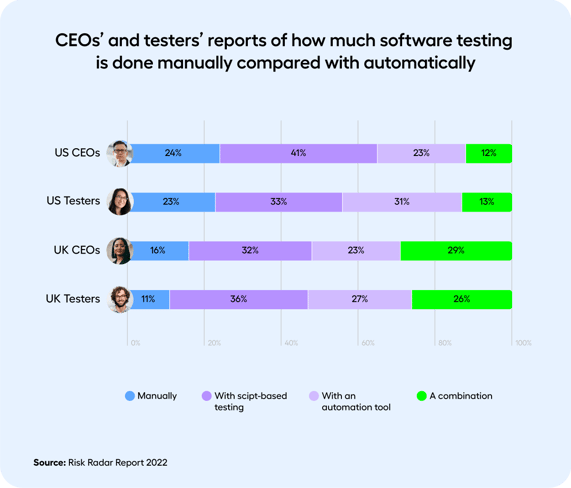 That said, script-based testing is heavily dependent on developers to make it work. It also takes time away from developers focusing on value-creation tasks, such as the ability to develop new features and customizations.

Writing and maintaining test scripts is a difficult process. It relies on skilled developers, and this creates a skills gap within QA.

With scripted testing, those who know your business best will remain separated from the testing process, unless they learn how to code.

The combination of a lack of qualified resources and testing bottlenecks means that there is less time for QA, which in turn, results in insufficiently tested software.

When automation becomes synonymous with programming, testers are spending more time setting up automation than is necessary, which presents new challenges. In other words, this is a resource that isn’t being used to its full potential.

Perhaps it isn’t a surprise that so much software is going to market without sufficient testing, considering the overall reliance on script-based testing.

That isn’t the case though if you use a visual testing tool like Leapwork’s. Just look at this example of a testing flow with Leapwork’s no-code tool. 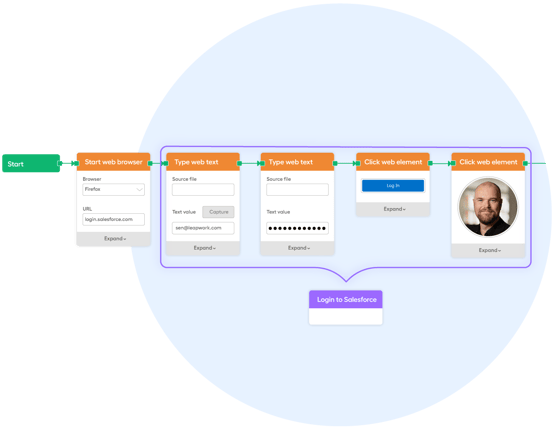 With Leapwork, a tester can automate cases straight away, instead of wasting time going through complex coding practices.

All this, combined with the fact that testers have more time for exploratory testing, value creation projects and software customizations, allows for a more thorough, planned testing strategy.

A thorough approach with more exploratory testing has one significant outcome: less risk. This is why no-code test automation can help to prevent risk.

Reducing risk in QA is going to take a whole new mindset: companies need to start thinking about extending the execution of test automation to the many instead of the few.

Only then will your organization be able to unlock the full potential of test automation, helping you reduce risk, cut costs, increase time to market, and safeguard your brand reputation.

Want to know more about risk in QA and the current state of play in terms of how much testing  is being automated? Then download the full 2022 Risk Radar Report below.