Selenium is a great tool for professional programmers who want to automate web application testing, but for users who don’t write code nor want to, there are better options.

Selenium WebDriver is the world’s most popular open-source framework for automating browsers.

Its API can be used to drive any action that takes place in a browser natively, meaning that it can click on buttons and type text into fields, just as a real user would.

Selenium has lots of benefits:

Professional programmers with years of experience in writing reusable and maintainable code could find Selenium a great solution. Especially if you're only automating web applications in a browser.

It has a well-designed programming model and a large ecosystem of pay-as-you-go cloud services such as BrowserStack and Sauce Labs to run in parallel across multiple devices and browsers.

However, if you are a tester or you are managing a team of QA professionals, using Selenium may cause more problems than it solves; it’s a low-level solution to a high-level problem.

Low-level means dealing with all the tiny, intricate technical details.

Test automation, on the other hand, requires a high-level approach that hides complexity from the user through abstraction.

In the end, it takes an enormous effort to implement, and more often than not, Selenium code grows into a beast that is impossible to maintain.

Let’s start by taking a look at a simple test automation example: 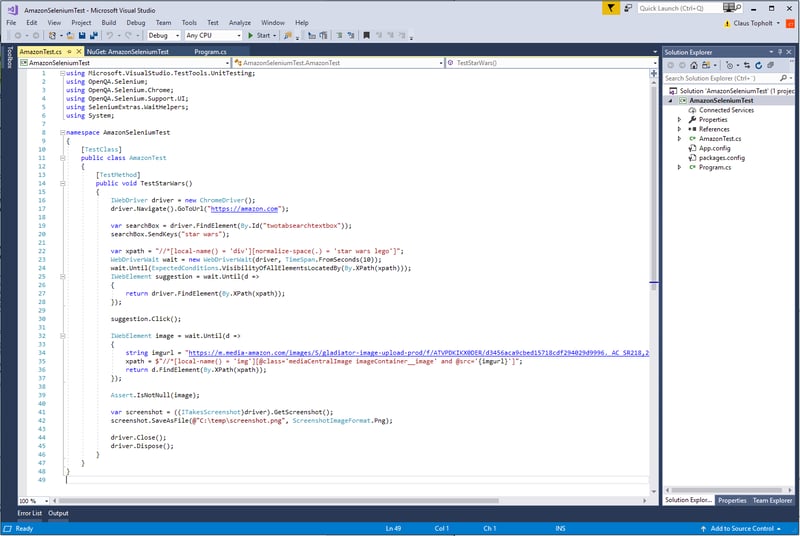 An example of Selenium automation, written with C# code.

As explained in the Sauce Labs’ introduction to Selenium, there are seven basic steps in creating a Selenium script for test automation:

It sounds straightforward, but it’s clear from the example above that it’s a very complicated and time-consuming task to write the appropriate code.

It takes an experienced programmer about 30 minutes to solve this small example, and even if the programmer is highly skilled, it would still require several trips to Google to look up how to do things correctly.

But the biggest problem facing non-professional programmers isn’t actually getting the automation code to work initially.

It’s maintenance of the scripts, particularly in an enterprise environment. Below is an example of an error that might appear periodically after the script has been running fine for a few weeks:

An example of an error message that might suddenly show when running Selenium automation. Users might not even know what the error message means.

How to deal with that? Who to call? Google results point to some articles from 2011, which looks very outdated…

In contrast, here’s a screenshot of the same test automation example built in less than two minutes with Leapwork.

It’s completely visual, doesn’t require any programming skills and can be easily maintained.

The same test case automated with Leapwork, made up of six standard components.

We timed the efforts to evaluate which of the two approaches is more efficient. Spoiler alert: It’s not even close.

Selenium comparison: the pros and cons of using Selenium vs Leapwork

We’ve put together a list of pros and cons of using Selenium WebDriver directly with code versus using Leapwork to perform the same tasks.

You can also download a PDF version of the comparison here.

The complete guide to automating tests with Selenium

You can access the full pdf version of our guide to learn more about Selenium and how it stacks up against Leapwork. It covers the skills, effort and resources needed to use Selenium to its fullest. And,  it proposes a web automation solution that doesn't require technical programming skills.