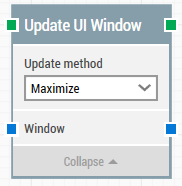 The green input connector in the header is used to trigger the block to start executing.

The green output connector in the header triggers when the UI element has been successfully found.

The title of the block (“Update UI Window”) can be changed by double-clicking on it and typing in a new title.

Select which method to use to update UI window. There are three available options:

Window handle of the window to be updated.